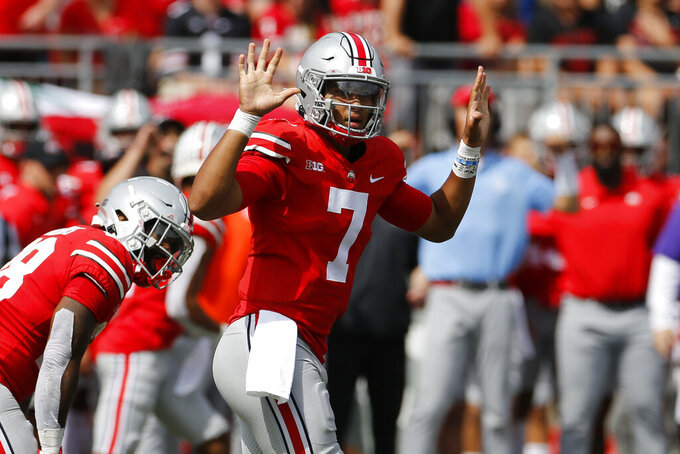 PASADENA, Calif. (AP) — Utah’s first Rose Bowl appearance is a landmark achievement. For the 10th-ranked Utes and their fans, it feels like the culmination of this program’s steady 20-year transformation from a mid-major overachiever to a perennial championship contender in the Pac-12 and beyond.

“We’ve been working a long time to get here,” Utah coach Kyle Whittingham said. “We got in the league 11 years ago. It’s been a long, hard journey, but our guys got it done. This is what we’ve been shooting for for a number of years.”

No. 7 Ohio State’s 16th trip to the Granddaddy of Them All can’t help seeming like a slight letdown to some, given the storied Buckeyes’ national title aspirations this season and their most recent appearance in Pasadena only three years ago.

Both teams' players and coaches still expect they’ll never forget the experience of running onto the fabled turf in Arroyo Seco and playing in the 108th edition of this classic bowl on Saturday.

“We're in a very prestigious bowl game,” Buckeyes safety Ronnie Hickman said. “We're taking this very seriously. We're definitely trying to get the win. ... You grow up watching the greats playing (in the Rose Bowl). Having a chance to play here and representing your team and your family is a blessing.”

The Utes (10-3) have won six straight games in dominant fashion, capped by a second rout of Oregon to win their first Pac-12 title. The Buckeyes (10-2) have won nine of 10, but their winning streak and College Football Playoff hopes ended with their loss to archrival Michigan.

Their meeting pits a Pac-12 program famous for playing harder-nosed football than its West Coast rivals against a Big Ten power that hasn't always met that conference's lofty standards for physical play, particularly while giving up 42 points to the Wolverines. But Ohio State’s determination is rarely lacking between the lines, and both coaches think the Rose Bowl will be won by the team that best showcases its toughness.

“It doesn’t take an expert to figure out what we needed to really focus on here over the last month,” Ohio State coach Ryan Day said. “I think the practices have been really good. They’ve been spirited. They’ve been physical. There’s been a lot of progress made, but the ultimate test will be on Saturday.”

Utah’s growth has been one of the most impressive stories of the 21st century in college football. After a two-year kick-start from Urban Meyer, Whittingham took over in his home state in 2005 and built a marvelous program that overcomes Salt Lake City’s significant recruiting disadvantages with consistent coaching, improved recruiting at speed positions and constant hard work.

Day had a wholly different challenge when he replaced Meyer in Columbus after Ohio State's most recent Rose Bowl appearance, but the head coach has kept the Buckeyes at the peak of the sport for three seasons, leading them to the national title game last year.

This game will be among the biggest moments in program history for the Utes, even if doesn’t quite carry the weight of the Fiesta Bowl (2005) and Sugar Bowl (2009) victories that capped perfect seasons earlier in this century. It’s also a remarkable finish to Utah's extraordinarily draining season played while mourning late teammates Ty Jordan and Aaron Lowe.

Last season's game was moved to Texas, where lax coronavirus regulations allowed the College Football Playoff to stage its semifinal with fans. The move included the cancellation of the Rose Bowl Parade, and it left a hole in the public fabric of Pasadena that organizers are grateful to mend this season.

Cameron Rising is the key to Utah’s turnaround after a 1-2 start, and the Ventura County native is coming home to play in the grand finale. He began the season as a backup and ended it as the All-Pac-12 first team’s quarterback, passing for 2,279 yards and 18 touchdowns while rushing for 407 yards.

“It’s something I always dreamed of playing in ever since I watched USC and Texas back in ’06,” Rising said of the Rose Bowl. “I’m just happy to be here. I know my family is loving it."

Ohio State receivers Chris Olave and Garrett Wilson opted out of the Rose Bowl to preserve their health for the NFL draft, as did star defensive tackle Haskell Garrett and starting left tackle Nicholas Petit-Frere. A program with the Buckeyes’ depth rarely has a shortage of replacements for any players, and Day is confident his backups will perform as expected while gaining valuable experience for next season.

“What a great opportunity for some of our younger guys to come in and start this thing off the right way,” Day said.

Utah has been a dominant postseason team over the previous 22 years, losing only three of their 17 bowl games during that stretch under Ron McBride, Meyer and Whittingham. The Utes always travel well, but the Rose Bowl is different: Utah's fans bought up their school's entire allotment of tickets and then many thousands more. Utah fans are expected to dominate the crowd in Arroyo Seco.