Utes want world to get loud for Jordan, Lowe at Rose Bowl 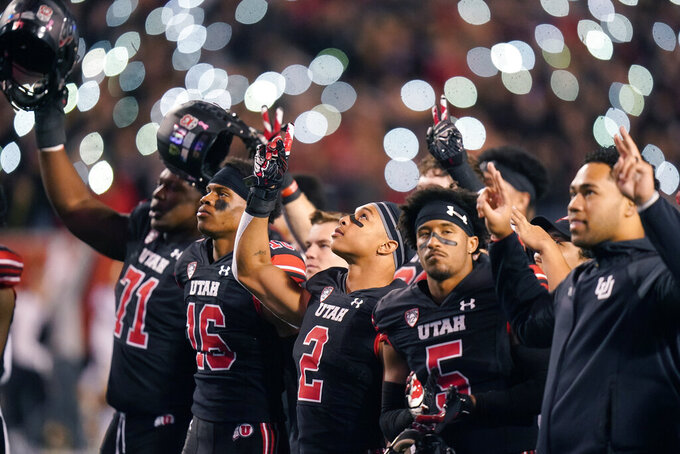 FILE - Utah players remove their helmets and point skyward to honor Ty Jordan and Aaron Lowe during the second half of an NCAA college football game against UCLA Saturday, Oct. 30, 2021, in Salt Lake City. University of Utah retired the number 22 in honor of the deaths of Jordan and Lowe. At some point near the start of the fourth quarter of the 108th Rose Bowl on Saturday, the football fans in Arroyo Seco will rise together in memory of Ty Jordan and Aaron Lowe. Instead of joining in a moment of silence, Utah and Ohio State fans alike will cheer, stomp, clap and scream their hearts out. (AP Photo/Rick Bowmer, File)

PASADENA, Calif. (AP) — At some point while the sun sets near the start of the fourth quarter of the 108th Rose Bowl on Saturday, the football fans in Arroyo Seco will rise together in memory of Ty Jordan and Aaron Lowe.

Instead of joining in a moment of silence, Utah and Ohio State fans alike will cheer, stomp, clap and scream their hearts out.

This Moment of Loudness, as the Utes call it, is the vehicle for catharsis chosen by this resilient football team to deal with the unfathomable dual tragedies inflicted on the Utah program over the past 12 months.

The cheers never erase the tears, but they turn the Utes' ever-present, profound sadness into something hopeful, something positive — something to keep Jordan and Lowe alive in their hearts long after their gun deaths.

“We went through a lot this year,” defensive back Clark Phillips said. “We had goals, and we lost people along the way. Just being in this game was something we dreamed of, and it’s something they dreamed of, too. It’s been a lot of bittersweet moments.”

Utah's first trip to the “Granddaddy of Them All” is a moment for the ages among its legions of faithful fans, and none of these Utes could ever forget the duo who didn't make it.

The deaths of the two close friends and former high school teammates rocked the program they left behind, yet the Utes rallied in their absence to win the school's first Pac-12 title during one of the most memorable seasons in Utah history.

The Utes' love for Jordan and Lowe loomed over it all.

“It really just brought us together and made us a more tight-knit group,” said Utah quarterback Cameron Rising, whose midseason ascent to the starting job catalyzed the Utes’ roll to the Pac-12 tile.

“That really just led to us being so successful together, because we were able to lean on each other in different ways,” Rising added. “And it just made the difference with having that trust level with one another. You just know that the next guy in the room really loves you. That makes a difference.”

The Utes' closeness is manifested in innumerable ways. While NFL prospects across the country dropped out of their bowl games over the past few weeks to preserve their health for their future payday, every one of these Utes — in a program that produced 26 NFL draftees in the last six years — stuck around to play in Pasadena.

“It’s really important to not only the seniors, but the underclassmen,” said offensive lineman Nick Ford, an LA-area native and one of at least six Utes to declare for the draft. “They see how important it is. With all the adversity they faced this year with Ty and A-Lowe, I feel like it kind of matured them a little quicker than having to stay in the program two, three years. I think everyone on the team, especially those who came back, find it really important to go ahead and finish.

Jordan’s only season at Utah was incredibly promising: The former Texas commit rushed for 597 yards and six touchdowns during five games in empty stadiums, becoming the first Utah freshman since 1990s star Chris Fuamatu-Ma’afala to post three straight 100-yard games on the ground.

Jordan died on Christmas 2020 in Denton, Texas, apparently after shooting himself accidentally in the stomach. The Utes attended the heartbreaking funeral in Arlington, with teammates serving as pallbearers.

Lowe, a third-year defensive back, appeared in Utah’s first four games this season and earned praise from Whittingham as a team leader. He even changed his uniform number from 2 to Jordan's 22.

Lowe died at a house party in the Sugar House neighborhood of Salt Lake after an apparent dispute while Lowe was trying to move his car. A suspect was quickly arrested, but the tragedy further traumatized the Utes, some of whom had been at the same party.

The Utes held their first Moment of Loudness for Jordan in their season opener against Weber State. After a brief scoreboard video explaining the plan to honor Jordan with the cheers he never got to hear at Rice-Eccles Stadium, the Utes shot off fireworks while the crowd rose for a thunderous standing ovation.

They've kept it up after Lowe's death in home games and again at the Pac-12 title game in Las Vegas, where fans held aloft thousands of phone lights in the second quarter.

Saturday's Moment of Loudness won't be confined to Pasadena, either. Utah is encouraging everyone watching the Rose Bowl at home to join in with camera lights and cheers, even filming video of themselves giving one last tribute to Jordan and Lowe from afar.

“We wish they were here with us,” linebacker Nephi Sewell said. “But we know they’re watching over us, and they’ve been playing every game with us.”