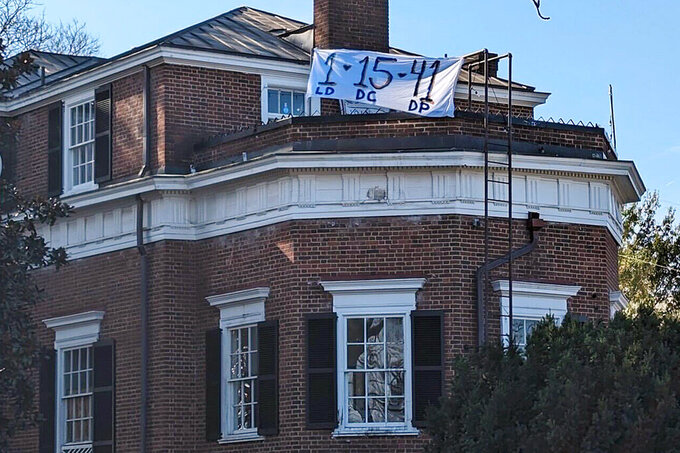 A banner with the numbers and initials of three University of Virginia football players killed in a shooting hangs from a home near the crime scene, Monday, Nov. 14, 2022, in Charlottesville. Va. Lavel Davis Jr., Devin Chandler and D'Sean Perry were were killed in a shooting, Sunday, Nov. 13, 2022, in Charlottesville, Va., while returning from a class trip to see a play. (AP Photo/Nathan Ellgren)

CHARLOTTESVILLE, Va. (AP) — A basketball game scheduled for Monday night between Northern Iowa and No. 16 Virginia has been canceled after three football players for the Cavaliers were killed in a shooting as they returned to campus.

Lavel Davis Jr., Devin Chandler and D’Sean Perry were fatally shot Sunday night after they returned from a class trip, according to the university. Two other students were injured, one critically, Virginia President Jim Ryan said.

Christopher Darnell Jones Jr., a 22-year-old former member of the football team, was suspected of carrying out the attack, which caused the university to issue shelter-in-place orders to its students. The order was lifted Monday, shortly before Jones was arrested.