Vaccines in sports at a glance 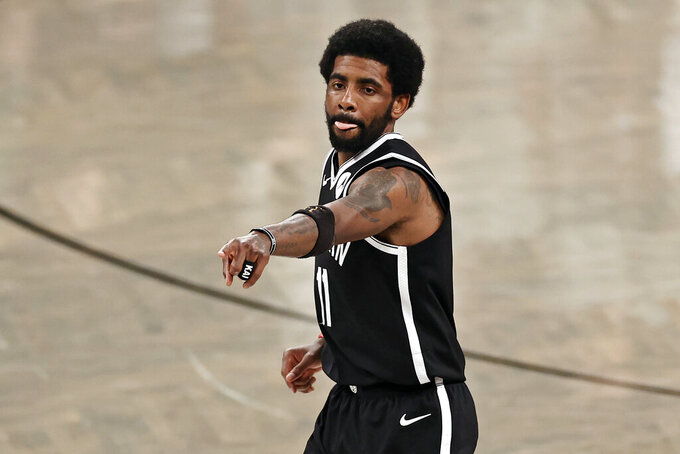 FILE - In this June 5, 2021, file photo, Brooklyn Nets guard Kyrie Irving (11) reacts against the Milwaukee Bucks during the second half of Game 1 of an NBA basketball second-round playoff series in New York. The NBA's Brooklyn Nets begin the season without star guard Kyrie Irving, who cannot play or practice at home because of a New York City vaccine mandate and was told by the team he wouldn't be around at all until his status changes. Irving and other unvaccinated players around pro sports don't get paid for the time they miss. (AP Photo/Adam Hunger, File)

A vast majority of players in the NFL, NBA, NHL and Major League Baseball are fully vaccinated against COVID-19, yet a handful of cases have brought attention to those who have refused. A look at some of the most prominent examples:

The Brooklyn Nets star guard would have been prevented from playing or practicing at home because of a New York City mandate. The team told him he would also not play in road games until his status changes.

The Washington Wizards guard said he has questions about how someone can still contract the virus even after being vaccinated. Beal cited “personal reasons” for not getting vaccinated.

The Orlando Magic forward said he has had COVID-19 already and insisted he is not anti-vaccine, anti-medicine or anti-science. Isaac said he's "not ashamed to say that I’m uncomfortable with taking the vaccine at this time.”

The NBA denied Wiggins’ request for a religious exemption, and the Golden State Warriors forward faced a potential absence in home games similar to Irving because of a local mandate. Wiggins said he got vaccinated in early October.

The Minnesota Vikings quarterback has steadfastly refused to get vaccinated and vowed to distance himself from teammates, even if it means setting up plastic glass around his seat. Cousins called it “a very private health matter” but declined to elaborate further.

The Indianapolis Colts QB spent time on the league's COVID-19 protocols list before the season started. That did not convince Wentz to get vaccinated.

The reigning Defensive Rookie of the Year is one of at least a few Washington players who have not been vaccinated, including fellow pass rusher Montez Sweat and cornerback Kendall Fuller. Young has called it a personal choice and said he would adhere to protocols.

Cut by the New England Patriots just before the season, the veteran QB said he has been fully vaccinated and is ready to play football again. He is a free agent.

The Boston Red Sox pitcher acknowledged after a bout with COVID-19 in September that he is unvaccinated. MLB says 87.4% of tier 1 staff, including players, managers, coaches and staff, is fully vaccinated.

The pitchers-turned-announcers were barred from working in studio for MLB Network after not complying with its vaccine mandate.

The NHL suspended the San Jose Sharks forward 21 games for submitting a fake vaccination card, an absence that will cost him just under $1.7 million. Kane said in a statement, “I made a mistake, one I sincerely regret and take responsibility for.”

Bertuzzi said he was “set in stone” about not getting vaccinated, even though he'll miss all of the Detroit Red Wings' games in Canada, which requires a two-week quarantine for unvaccinated players who enter the country. He stands to forfeit more than $400,000 in salary for not being available for those games.

The New Jersey Devils goaltender said during training camp he was not vaccinated but did not rule out getting the shot. He's a candidate to play for Canada at the Olympic hockey tournament, which would require him to get vaccinated to participate.

The former NHL defenseman was replaced as a Columbus Blue Jackets assistant coach after he declined to adhere to the league's mandate for all coaches and staff to be vaccinated. San Jose associate coach Rocky Thompson stepped down, citing a medical exemption that prevents him from receiving a COVID-19 vaccine.