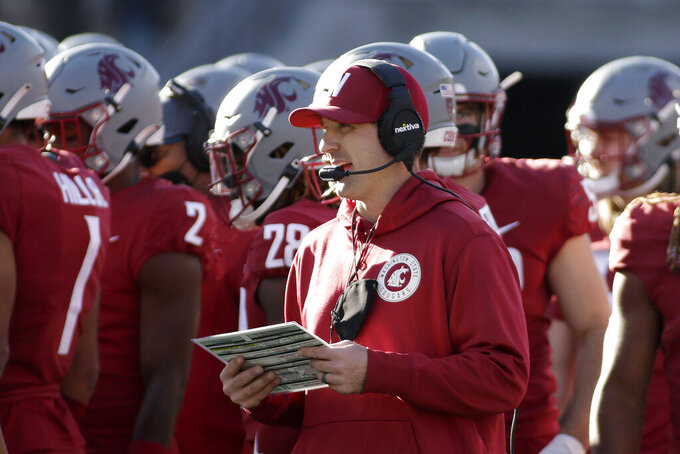 Washington State defensive coordinator and linebackers coach Jake Dickert, center, stands on the field during a break in play in the second half of an NCAA college football game, Saturday, Oct. 9, 2021, in Pullman, Wash. Dickert was named Washington State interim head coach, Monday, Oct. 18 after head coach Nick Rolovich was fired for refusing a state mandate that all employees get vaccinated against COVID-19. (AP Photo/Young Kwak)

Washington State acting head coach Jake Dickert said Tuesday that his immediate focus in his new role is providing support and stability for players who were left hurting and shocked after Nick Rolovich and other coaches were fired for refusing to comply with the state's vaccine mandate.

He said he addressed the team during practice to assure players he understands what they're going through and that he and the other remaining coaches are “in it with them.”

“My No. 1 job today and going forward is that our young people have fear, doubt and uncertainty in their minds and my job is to replace that with faith, trust and belief," Dickert said during his introductory news conference. "I think those three words are the cornerstones of any program, any real culture.”

Dickert was elevated to interim coach from defensive coordinator Monday after Rolovich and four of his assistants were fired for not complying with the governor's mandate that all state employees must be vaccinated against the coronavirus. Rolovich had requested a religious exemption that was denied Monday, the state's vaccination deadline. Also fired were assistant coaches Ricky Logo, John Richardson, Craig Stutzmann and Mark Weber.

Athletic director Pat Chun has said Washington State will work to bolster the staff after taking the unusual step of firing a head coach and so many assistants in the middle of a season.

Washington State (4-3, 3-2 Pac-12) is now preparing to host BYU on Saturday. Dicker said the biggest challenge, however, is helping the players cope.

"I’m a firm believer that adversity is life’s greatest teacher and that’s what I preach to our guys and I think this is going to be another challenge for our guys to continue to learn and grow,” he said.

The 38-year-old Dickert, who was vaccinated earlier this year and shared the moment on social media, is in his second season with the Cougars. He said he will continue to act as the defensive coordinator. He will also retain the run-and-shoot offense Rolovich brought to the team.

“Our guys are confident in what we do,” Dickert said. “The offensive philosophy will stay the same.”

Dickert has less than five years of experience coaching at the FBS level. Before arriving at Washington State, he spent three years at Wyoming. He has also worked at a variety of lower division programs, including FCS power North Dakota State.

Dickert thanked Rolovich during the news conference for giving him the opportunity to coach at Washington State. He said he had a brief conversation with Rolovich after the firing.

“I think coach wants our guys to move on,” Dickert said. "That was the brief conversation that we had.”

Meanwhile, some players continued to express support for Rolovich.

Quarterback Jayden de Laura issued a statement through his attorney saying he disagreed with the decision to fire Rolovich.

“Words cannot express our profound sadness and disappointment in the termination of our coach,” the statement said. “Playing for him was a great honor that all of us will cherish forever.

“But we also understand that Cougar football has always been bigger than any one person,” de Laura said. “We are a band of brothers who play and sacrifice for each other, no matter who the head coach is.”

Cornerback Jaylen Watson shared an image on Instagram of his embrace with Rolovich after the team’s 34-31 win over Stanford on Saturday. The photo was accompanied by a red heart emoji split in half.

“This man changed my life in so many ways,” Watson later tweeted. “A real stand up dude ... and a true role model to me and my teammates."