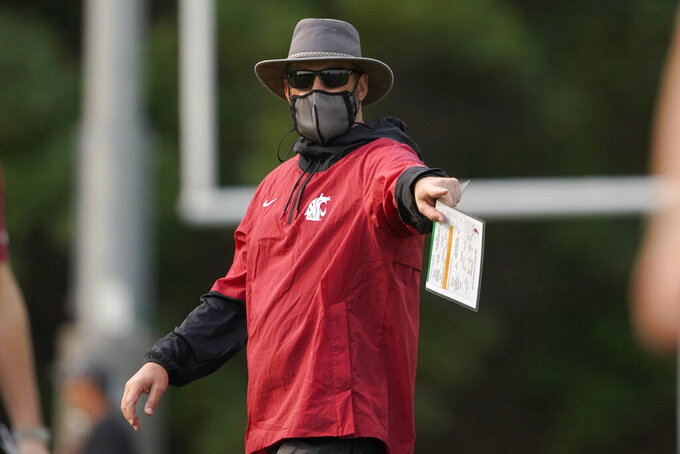 PULLMAN, Wash. (AP) — Washington State coach Nick Rolovich said Thursday that he intends to follow a new state mandate requiring COVID-19 vaccinations for all those working at the state’s colleges and universities, including coaches.

Rolovich had said previously that he was not going to get the vaccine for personal reasons and did not explicitly say Thursday that he would receive a shot. “I’m just going to follow his mandate,” he said.

The mandate announced this week by Washington Gov. Jay Inslee also covers public, charter and private school teachers and staff. It allows for religious or medical exemptions but does not allow for a weekly testing alternative, and those who are not fully vaccinated by Oct. 18 risk losing their jobs.

Asked if he would wait for full FDA approval before receiving the vaccine, Rolovich repeated his plan to follow the mandate.

Rolovich is beginning his second season in charge of the Cougars. He participated in Pac-12 media day last month remotely after announcing his decision not to get vaccinated. His announcement had drawn attention from the top levels of the state government. Rolovich is one of two state employees making more than $3 million, along with Washington coach Jimmy Lake.

Rolovich had previously said he was not against vaccination and supported the decision of others to receive a COVID-19 vaccine. Before the start of preseason camp, Washington State’s vaccination rate as a team was around 75%.

Rolovich said there was a meeting of the Washington State head coaches following the mandate announcement. He said he believes the rest of his staff that is unvaccinated would also be complying.

“I believe they all plan on following the mandate. It’s what the deal is,” Rolovich said.