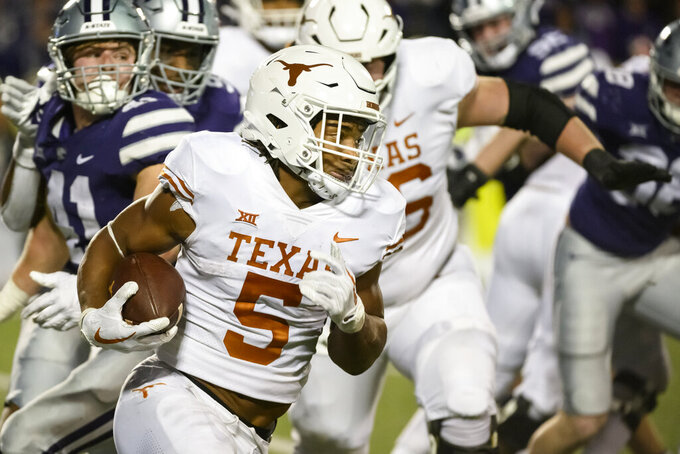 No. 4 TCU has a chance to wrap up a spot in the Big 12 Conference championship game, but who would play the Horned Frogs for the title could remain very much in question.

TCU would clinch the top spot in the championship game with a win.

It’s pretty jumbled from there. Texas is coming off a win at Kansas State, which already lost at TCU. Baylor’s final three games are Kansas State, TCU and Texas, so the defending Big 12 champion Bears control their destiny in trying to get back to the title game.

The What to Watch rundown in college football presented by Regions Bank:

Georgia quarterback Stetson Bennett IV already has a national championship, and his Heisman Trophy stock seems to be on the rise, too. Bennett just outdueled another top candidate, Tennessee's Hendon Hooker, and is in the mix for consideration along with USC quarterback Caleb Williams. He has completed 67.8% of his passes for 2,606 yards and 11 touchdowns with three interceptions. Just as notable, Bennett is 2-0 against No. 1 teams in his career and 23-3 as a starter.

SMU quarterback Tanner Mordecai passed for seven first-half touchdowns and nine overall in a 77-63 win over Houston. The 133 combined points was an NCAA record for a regulation game. ... Alabama has had national championship implications i n 171 of its last 174 regular-season games since 2008 heading into this week. The other three times it wasn't in contention all came in the 2010 season. ... Temple’s Edward Saydee (265 rushing yards, 69 receiving) and Kansas’s Devin Neal (224/110) both totalled 334 all-purpose yards, tied for second-most in the FBS this season. ... San Jose State’s 17 sacks are the most in back-to-back games in at least 10 years, according to NCAA records. That includes eight sacks against Nevada and nine against Colorado State.

West Virginia coach Neal Brown needs to win out to become bowl eligible after dropping three straight games. A closing slate of Oklahoma, Kansas State and Oklahoma State makes that a tough challenge for the Mountaineers (3-6, 1-5 Big 12). Brown is 20-24 approaching the stretch run of his fourth season.

A Top 25 matchup doesn't usually qualify as an “under the radar” game, but No. 22 UCF at No. 16 Tulane is worthy of a little extra spotlight.

It's the first time a ranked Tulane has hosted another Top 25 team since a 1949 game with LSU.

UCF's John Rhys Plumlee, who missed the Memphis game with an injury, has passed for 1,883 yards and run for 532. Mikey Keene proved a capable sub if he's called on again.