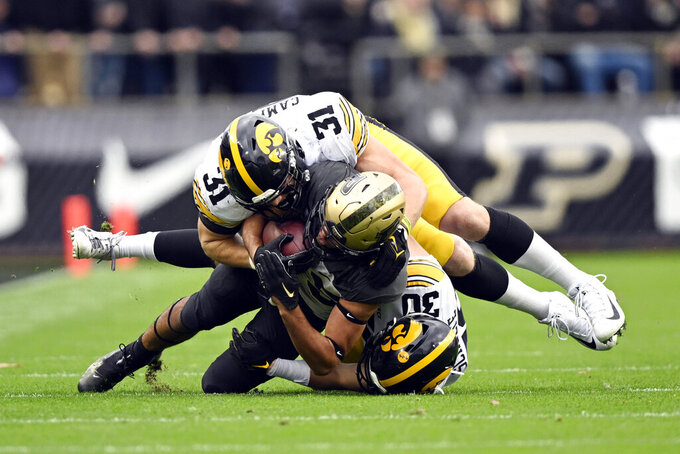 The Heartland Trophy, a 72-pound brass bull, has gone to the winner of this game since 2004. Wisconsin wants to keep that trophy in its possession after beating the Hawkeyes 27-7 last season. Each team is seeking its third consecutive victory.

Wisconsin running game vs. Iowa run defense. Wisconsin’s Braelon Allen and Isaac Guerendo each rushed for over 100 yards last week, with Guerendo scoring on a 89-yard run in a 23-10 win over Maryland. Allen has rushed for 989 yards and 10 touchdowns. His 109.9 yards rushing per game ranks 15th in the Football Bowl Subdivision. Iowa is allowing 2.63 yards per carry to rank fourth nationally. LB Jack Campbell has a Big Ten-leading 89 tackles. Allen rushed for 104 yards against Iowa last season.

Wisconsin: OLB Nick Herbig is averaging one sack per game to put himself in a tie for first in the FBS. He has eight total sacks and is coming off a two-sack performance against Maryland.

Iowa: RB Kaleb Johnson rushed for 200 yards on 20 carries last week in a 24-3 victory at Purdue. That follows a 13-carry, 93-yard outburst in a 33-13 win over Northwestern. He has rushed for 553 yards and four touchdowns so far in his first season with an average of 5.76 yards per carry.

Wisconsin has a 39-8 November record since 2010. The only Power Five teams with better November winning percentages during that stretch are Ohio State (.870), Georgia (.860) and Oklahoma (.837). … Iowa is allowing 3.85 yards per play, the lowest average in the FBS. The Hawkeyes are yielding 14.3 points per game to rank fifth in scoring defense and 264.4 yards per game to rank third in total defense. … Wisconsin has intercepted 15 passes. The only FBS team to pick off more is Illinois with 16. … Wisconsin S John Torchio has five interceptions to tie for the FBS lead. … Iowa has averaged 28.5 points during its current two-game win streak. The Hawkeyes had averaged just 14 points per game during their 3-4 start. … Wisconsin owns a 3-1 record under interim head coach Jim Leonhard.