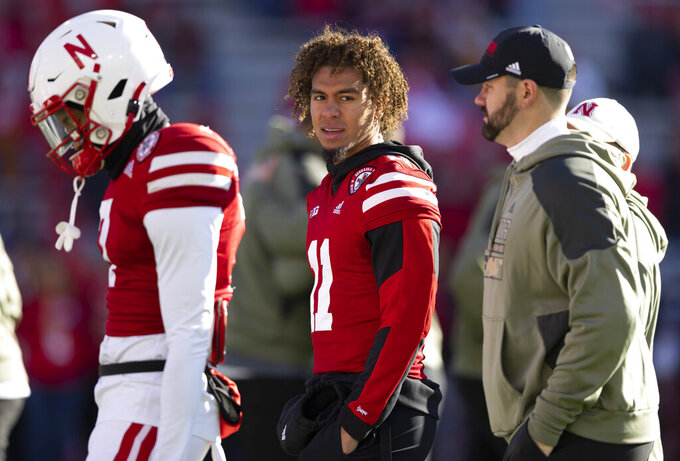 Nebraska quarterback Casey Thompson (11) walks around out of uniform during warmups before an NCAA college football game against Minnesota, Saturday, Nov. 5, 2022, in Lincoln, Neb. Thompson was injured during Nebraska's game against Illinois the previous week. (AP Photo/Rebecca S. Gratz)

Wisconsin needs to win one of its last two regular-season games for bowl eligibility. The Badgers are 1-3 in Big Ten road games, with the win coming at Northwestern, and a loss in Lincoln would put them at risk for their first losing season since 2001. Nebraska's motivation is ending its eight-game losing streak in the series. Interim coach Mickey Joseph put “2012” on a meeting room board this week to remind the team of the last time the Cornhuskers beat Wisconsin.

Nebraska offense vs. Wisconsin defense. Joseph announced Thursday he expects Casey Thompson to start at quarterback after missing the past two games because of injury. Logan Smothers would be his backup. Chubba Purdy started the last two games but is out for the season with an ankle injury. The Badgers are middle of the pack among Big Ten defenses but still plenty stout and capable of making it a miserable day for whoever takes the snaps.

Wisconsin: LB Nick Herbig has five sacks the past two weeks since missing the Purdue game with an injury. His 11 sacks are second nationally and his average of 1.2 per game is first. He's also among the leaders in tackles for loss (15.5 total, 1.7 per game).

Nebraska: OTs Turner Corcoran and Bryce Benhart will have primary blocking responsibilities against Herbig. They are among the lowest-rated tackles in the Big Ten, according to Pro Football Focus, and must step up their games and hope to get some help from the tight ends.

Wisconsin's eight-game streak in the series includes the six wins since the teams began playing for the Freedom Trophy in 2014. The Badgers have won three in a row in Lincoln. ... Nebraska's 22 points over its last three games are fewest since it totaled 17 in 1988 wins over Colorado and Oklahoma and an Orange Bowl loss to Miami. ... Wisconsin RB Braelon Allen went over 1,000 yards against Iowa last week and is the fifth player in program history to run for 1,000 in both his first and second seasons. ... Badgers RB Chez Mellusi has practiced all week and should play. He's missed four games with a wrist injury. ... Nebraska offensive coordinator Mark Whipple sustained a knee ligament strain when a Michigan player ran into him on the sideline last week. Whipple will call plays from the press box.