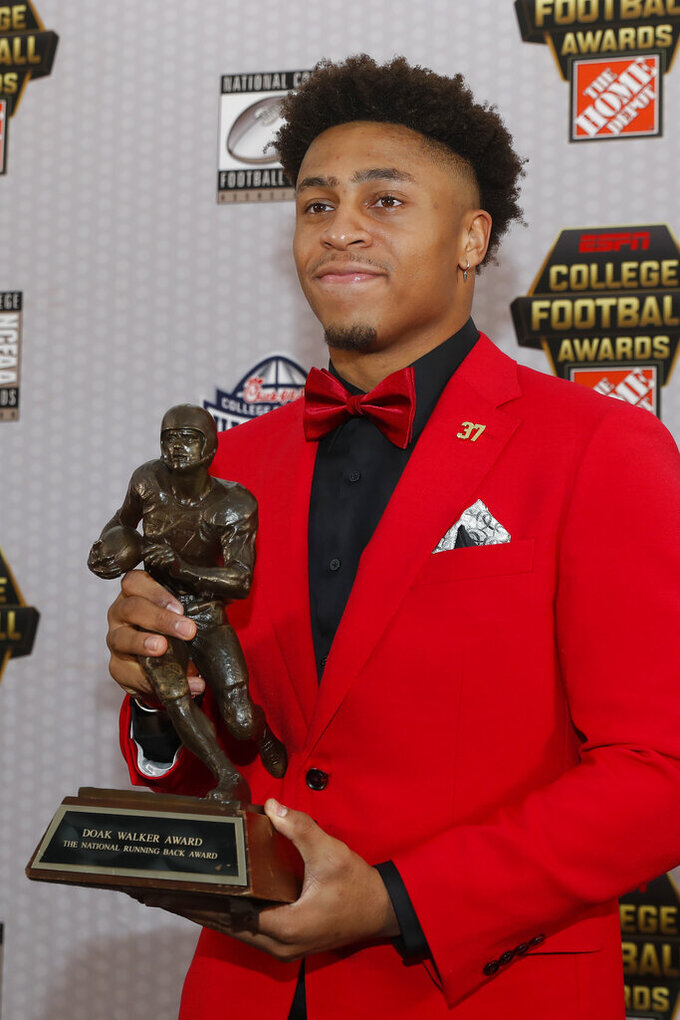 Wisconsin's Jonathan Taylor poses with trophy after winning the Doak Walker Award for being the nation's best running back Thursday, Dec. 12, 2019, in Atlanta. (AP Photo/John Bazemore)

PASADENA, Calif. (AP) — It is no longer a question of where Jonathan Taylor ranks among the greatest running backs to play at Wisconsin for assistant coach John Settle.

To Settle, Taylor has put himself alongside the best ever to play college football.

“I’ve said once if there were a Mount Rushmore of college running backs, he would be on it,” Settle said. “I think he’s that good. I think he’s put himself in that company with the Herschel Walkers and Bo Jacksons and some of the guys, the Heisman Trophy winners that have come before him, Ricky Williams, some of those guys.”

Taylor, the seventh FBS player with 6,000 career yards rushing and the first to reach the mark in three seasons, will get to show his greatness in the Rose Bowl against Oregon in what could be the final college game for the junior. He will then have to decide whether to declare for the NFL draft or use his final season of eligibility with a chance to become the most prolific rusher in FBS history. Taylor insists he has not made up his mind.

Instead, Taylor is focused on trying to get 100 yards rushing for the 33rd time, which would tie Ron Dayne for most in school history, in what will be his 41st career game at Wisconsin. He has been held under 50 yards just twice, managing 41 yards on 15 carries in the 2017 Big Ten championship game against Ohio State, and 46 yards on 11 carries at Northwestern in 2018. The steady production reflects a desire for consistency that has driven Taylor since arriving on campus.

“I wanted to come in here and be a guy who you knew what you were getting out of him each and every single week, game, practice, no matter what's going on,” said Taylor, who won the Doak Walker Award as the best running back in college football the past two seasons. “I think that was the biggest thing, because you see a lot of guys who are excellent for one year, and then you kind of don't hear about them. But I wanted to be a guy who was constant and someone who was always there.”

With 6,080 career yards rushing, Taylor has certainly fulfilled that goal. Should he return for his final season of eligibility, Taylor likely would shatter the record of 6,405 career yards rushing held by Donnel Pumphrey of San Diego State, which reflects an NCAA decision in 2002 to include statistics from bowl games in such totals.

Applying that criteria to Dayne gives him 7,125 yards rushing, which is the highest total in the history of college football and recognized by the Big Ten as the conference’s career rushing record.

No matter the measure used, Taylor would demolish either mark if he were to come close to the 1,909 yards rushing he has this season.

However, the prolific Taylor still insists he has not yet played his best game at Wisconsin, despite rushing for 200 yards in a game 12 times, including a career-high 321 yards at Purdue in 2018.

“You never play a perfect game,” Taylor said. “That's why you continue to work and strive, in order to try to one day accomplish a perfect game.”

Such production seems surreal to Wisconsin center Tyler Biadasz. Biadasz still remembers giving Taylor a few words of encouragement in the huddle before his first snap against Utah State in 2017, not knowing the freshman would become one of the best players in school history.

“Did I see it then? No, but it was never out of the question,” Biadasz said. “It’s how you always respond to whatever you want to do.”

Biadasz is looking forward to blocking for Taylor against a Ducks defense that ranked 12th nationally in yards per carry allowed (3.23). As long as the Wisconsin offensive line can give Taylor a “sliver” of open space, “he can go the distance,” Biadasz said

Oregon coach Mario Cristobal has no illusions about the challenge Taylor presents. It will be a matter of mitigating the damage Taylor can deliver.

If the Rose Bowl does turn out to be Taylor’s last collegiate game, Settle is in awe of their journey together. Settle went into training camp in the summer of 2017 thinking a successful freshman season for Taylor would be getting 10 carries a game if he won the backup job. In a matter of weeks, Taylor had convinced Settle he was the best player on the team.

“I think it was our final scrimmage of training camp, his talent just showed up, and he exploded on the scene,” Settle said. “And it hasn’t changed.”