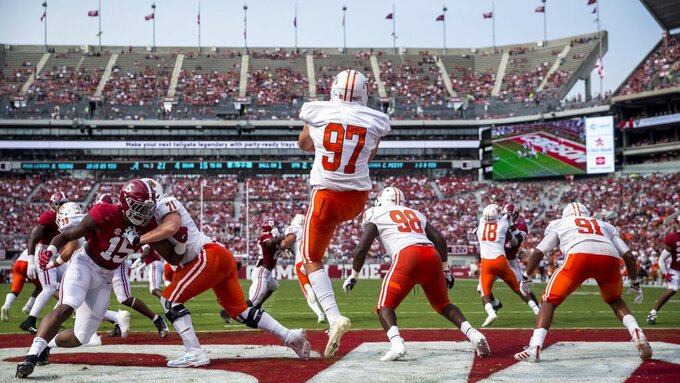 Mercer punter/kicker Trey Turk (97) punts out of his own end zone as Alabama linebacker Dallas Turner (15) adds pressure during the first half of an NCAA college football game, Saturday, Sept. 11, 2021, in Tuscaloosa, Ala. (AP Photo/Vasha Hunt) 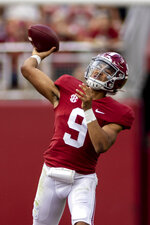 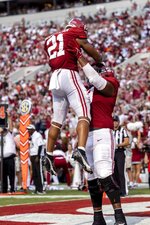 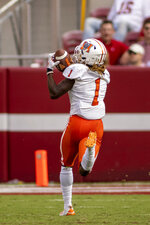 TUSCALOOSA, Ala. (AP) — Nick Saban thinks it might be time for a reckoning like his father used to deliver with a pounding of his hand on the dinner table.

Sure, Bryce Young threw three touchdown passes and Jase McClellan scored three times to help fuel No. 1 Alabama to a 48-14 rout of FCS Mercer on Saturday.

But it was still a performance that left plenty for the Crimson Tide coach to scowl about and harp on, just as Nick Sr. did at times with his various tasks and chores. Better to learn the lessons from two lopsided wins.

“If you didn't do any of those things right, you were going to do it again,” Saban said. “We might need a little of that somewhere along the line.”

The Tide (2-0) started sluggishly on offense in what amounted to a warmup game before the Southeastern Conference opener at No. 13 Florida, but potentially more notably had star linebacker Will Anderson Jr. leave with a right knee injury.

Saban said Anderson was questionable against the Gators.

Asked to evaluate his offense's first few possessions, Saban said “we stopped ourselves” on four first-half possessions with penalties and dropped passes.

“Well, what’d you think? I mean, it’s kind of a loaded question, isn’t it?” the coach responded to a reporter. “I mean, if it stinks it stinks. It smells bad for everybody. Smell bad for you? Yeah. What do you want me to do, make excuses for them?”

Special teams struck before Young and the offense. Chris Braswell blocked a punt, which McClellan scooped up for a 33-yard touchdown, and the expected rout was on against the Bears (1-1). It just took eight minutes and change.

“We all went up there with the mentality to block it,” McCellan said. “Once that happened it was just scoop and score at that point.”

A sophomore backup tailback, McClellan had two touchdowns in his first 14 games, but added a 21-yard catch and run and a 5-yard, fourth-down scoring run.

Young completed 19 of 27 passes for 227 yards after coming out slow in just his second game as ‘Bama’s starter. Freshman JoJo Earle had seven catches for 85 yards and also had a 29-yard punt return.

Mercer quarterback Fred Payton did burn Alabama for two big plays to wide-open receivers in the second half, a 60-yard touchdown to Devron Harper and a 22-yarder to Ty James in the third quarter.

“It’s an honor to be here," Mercer coach Drew Cronic said. “You go into a game like this, and you just want to find small victories and find ways to improve. I think we’re going to find that. Obviously, when you’re playing against a team like that, everything is magnified, every mistake you make is magnified.”

Anderson, a preseason All-American, headed to the locker room after coming up limping after a cut block to the right leg in the third quarter. The defense was already without fellow outside linebacker Chris Allen, expected to miss the rest of the season with a foot injury sustained in the opener.

“When it comes to injuries, it's just next man up,” linebacker Christian Harris said.

Mercer: Mostly held its own for a bit, but had to make a gigantic leap in competition after opening with a 69-0 win over the NAIA's Point. Some late blunders didn't help, including a 20-yard loss on a bad snap late to end a scoring threat.

Alabama: Went nowhere on its first two drives — and even had back-to-back penalties at one point — but neither did Mercer against the Tide defense. There was plenty for coach Nick Saban to harp on whatever the final score, including 95 yards in penalties.

Alabama cornerbacks Josh Jobe and Jalyn Armour-Davis didn't play for undisclosed injuries, but Saban said he expects them back for the Florida game. Freshman Kool-Aid McKinstry, one of Alabama’s top recruits in the latest class, started opposite junior Marcus Banks. Both McKinstry and Banks had interceptions, and Saban praised his talented freshman.

“I thought he did a good job, I really did,” Saban said. “He knew the game plan. He prepared well. He played well in the game."

Alabama's Will Reichard extended his nation's best streak of made field goals to 19, before missing a 34-yard attempt late in the third.

Alabama visits No. 13 Florida in a rematch of the Southeastern Conference championship game.