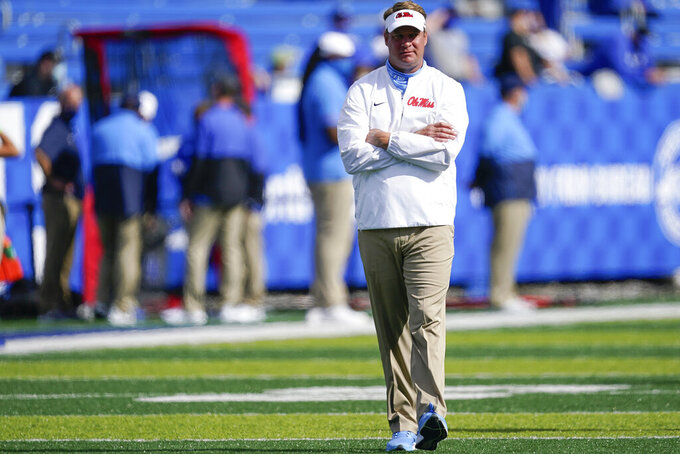 Quarterbacks and receivers have been the big stars in the Southeastern Conference through two weekends of games.

A look around the league once known for its mighty running games shows only five SEC running backs with 150-plus rushing yards. There are 14 players with at least that many receiving yards.

Alabama of all teams is a prime example of the offensive evolution with a dangerous passing game and a middling running attack.

“This is a different world than 11 years years ago when you used to go play them and you knew they were going to be in the I-formation and be able to keep the game close,” said first-year Ole Miss coach Lane Kiffin, who ultimately helped start Alabama’s offensive transformation to the spread as coordinator. “They’d pound it out, and now they don’t do that at all.”

Kiffin's Rebels are gearing up for a vastly different offense from No. 2 Alabama on Saturday than the plodding attack that narrowly survived the last matchup with one of his teams. The Tide beat Tennessee 12-10 in 2009 before going on to win a national title.

In the start to this COVID-19 shortened season, the SEC is a much more pass-happy group.

And no, the Big Ten and Pac-12 and others haven’t started playing, but the SEC still has five of the nation’s top six quarterbacks in passing yards per game. That group is led by Mississippi State’s K.J. Costello, thanks mainly to a record-setting 623-yard performance in an opening upset of defending national champion LSU.

Mississippi’s Matt Corral is third while the Tide's Mac Jones and Florida’s Kyle Trask are tied for fourth and LSU’s Myles Brennan is sixth. At Alabama, Jones has been launching bombs to receivers Jaylen Waddle, John Metchie III and DeVonta Smith.

“I do think this is a really good year for quarterbacks” in the SEC, Saban said.

The Rebels’ Elijah Moore is leading the nation in receiving, Alabama’s Waddle is second and four other SEC players are in the top 10. All this despite the league’s top receiver, LSU’s Ja’Marr Chase, and top Texas A&M target Jhamon Ausbon both opting out of the season because of COVID-19.

Plus, quarterbacks Joe Burrow of LSU and Tua Tagovailoa were top 5 NFL draft picks, while three SEC receivers also went in the first round.

The SEC still has plenty of firepower.

It’s not just the wide receivers, either. Florida tight end Kyle Pitts is one of the league’s top playmakers, racking up six touchdown catches and 227 yards already.

But the league’s top rusher, Tennessee’s Ty Chandler, ranks 27th nationally in yards per game. Coaches still talk about balanced attacks, but some of the top teams haven't yet needed it.

“You always play to the strength of your guys, so you go with what’s working,” Florida coach Dan Mullen said. “Coming in this week our goal is to be 50-50, right? I mean, if we can knock them off the ball, run the ball, we’ll do that. If they’re struggling covering us we’re gonna keep throwing.”

LSU and Alabama have kept on throwing even minus their superstar quarterbacks. Brennan has put up strong passing numbers even without Chase and first-round pick Justin Jefferson. He has thrown for 682 yards and seven touchdowns against three interceptions.

It's not Burrow-like numbers from his Heisman Trophy season, but then nobody else in the SEC ever had matched those either.

There are notable exceptions to the turn toward passing. Kentucky had three 100-yard rushers in a 42-41 overtime loss to Ole Miss. No. 3 Georgia so far remains built more on balance and one of the nation's stingiest defenses.

But fellow contender Alabama and defending champ LSU, minus some of their biggest offensive stars from 2019, are still embracing the pass-first mentality. It doesn't mean they'll abandon running with tailbacks like the Tide's Najee Harris.

“It seems like everybody is in the spread now,” LSU coach Ed Orgeron said. "Everybody has great athletes. Everybody’s throwing the ball deep. I watched the SEC on tape. I watched them on TV.

But the big challenge in the SEC nowadays is stopping the pass.