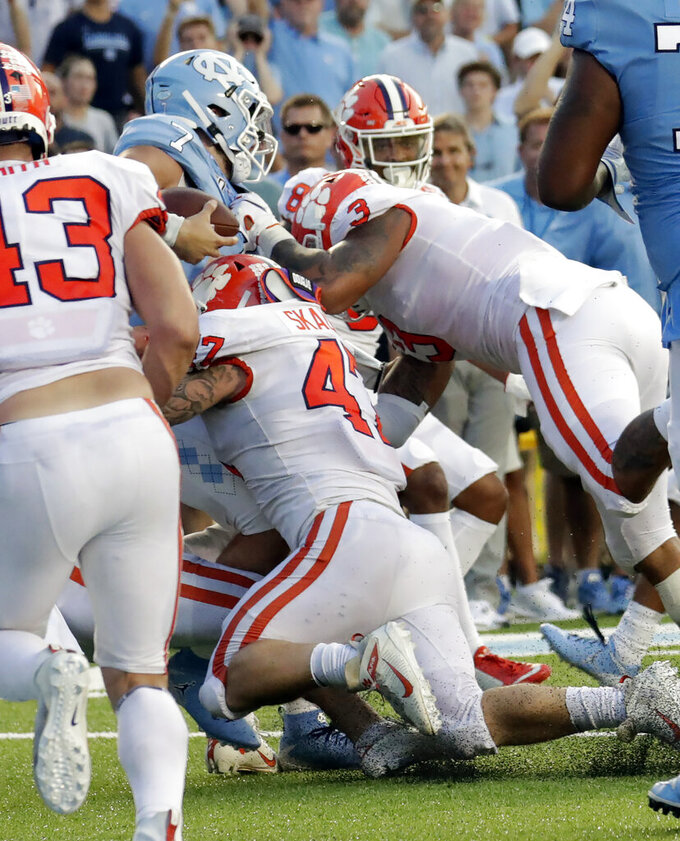 CLEMSON, S.C. (AP) — John Simpson is certain of two things about the new starters on the defensive line for No. 2 Clemson: They are tired of the questions and comparisons to last year's All-American group and "them boys are ready."

Simpson, the starting left guard for the Tigers, would know. He spent the past few seasons going up against defensive tackles Christian Wilkins and Dexter Lawrence and ends Clelin Ferrell and Austin Bryant at practice. Ferrell, Wilkins and Lawrence were all first-round NFL draft picks in April. Bryant went a couple of rounds later, the core four of Clemson's defense finally done harassing quarterbacks and racking up Atlantic Coast Conference and national titles.

Except maybe these new guys are just as good. They will get the chance to show that again Saturday when Clemson faces Florida State.

Logan Rudolph has locked down one end spot with junior Nyles Pinckney and freshman Tyler Davis filling the middle owned by Wilkins and Lawrence the past few seasons. Junior Justin Foster and sophomore Xavier Thomas share the other end position.

"There's no drop off," Simpson said with a sideways smile. "Not at all."

The numbers — and the on-field performance — bear that out. Clemson leads the ACC in total defense (255 yards allowed per game) and is third in sacks (19) during its 5-0 start. And they have helped the Tigers come up big in critical situations, none bigger than last time out when Thomas and linebacker James Skalski brought down North Carolina quarterback Sam Howell short of the goal on a two-point try in the final minutes of Clemson's 21-20 win.

"I feel like everybody's on the same level and we're all just growing together," Pinckney said.

There's a lot of growth to do and this group is not yet at the level of the departed stars.

"Hey, we don't have to be Clelin Ferrell or Austin Bryant," said Rudolph, a 6-2, 240-pound sophomore who is the younger brother of Pittsburgh Steelers quarterback Mason Rudolph. "We just need to be ourselves and give great effort every day and if we do that, we're going to be successful."

The revelation so far this season is Davis, who at 6-1, 290 pounds accomplished something Wilkins and Lawrence did not by becoming the first true freshman to start at defensive tackle for Clemson since 1974.

Davis is nowhere near as tall or bulky as the 6-4, 345-pound Lawrence. But his first step is just as quick and he's manhandled much bigger offensive linemen. Davis sits second on the Tigers with 2.5 sacks this season. Pinckney could see early that Davis was something special. When the older tackle would quiz the freshman on assignments and technique, Davis always had the right answer.

"He always had a jump on it," Pinckney said.

Brent Venables, the defensive coordinator at Clemson since 2012, has had to make wholesale changes across the front before. Clemson lost its front four after 2014, a group that included future Atlanta Falcons players Vic Beasley and Grady Jarrett, yet the Tigers began their run of four consecutive ACC titles and College Football Playoff berths with a new quartet up front.

Venables places a priority on subbing in backups who see meaningful minutes, getting them ready for their chance up front in a few years.

"You've got to develop your team," Venables said.

Venables said his biggest concern entering the season was where the leadership would come from. Wilkins and Ferrell weren't only defensive leaders, but drove everything the Tigers did during the 2018 national championship season. So far, Venables is pleased that Pinckney and backup Jordan Williams have set a strong tone for younger players to follow.

Maybe some of these players will end up on the Associated Press All-America team presented by Regions Bank, but time will tell.

Just stow the questions about replacing the stars.

"We knew we were going to get that, hearing 'All the good guys are gone. All our better guys are gone,'" said Williams, a third-year sophomore. "But we never paid attention to that. We wanted to be our own legacy."

The junior has made steady progress. He contributed and worked his way into the starting lineup as a freshman and became the team's leading receiver last season with 59 receptions and 876 yards. He is on pace to blow those numbers away this season, and his coming off consecutive games with 10 receptions. After 20 catches for 285 yards and four touchdowns the last two weeks, Hodgins is second in the nation in receiving yards at 126.4 per game.

(SEC Network analyst Cole Cubelic, a former guard at Auburn, breaks down an offensive lineman playing at an All-America level)

First-year starter has stepped into a spot held down last year by Michael Jordan, who was drafted in the fourth round by the Bengals. Myers has not let the play in the middle of the Buckeyes' line slip one bit.

"Myers was exceptional in helping the OSU line provide movement at the point of attack as well as finding defenders on the second level against Michigan State," Cubelic said. "His power and ability to finish blocks sets him apart from other collegiate centers."

Gallimore has been disruptive in the middle for an Oklahoma defense that has played better than last year, but will face its most severe test yet. Shackelford has been an anchor for a Texas line that has grown into a reliable and at times dominant group.