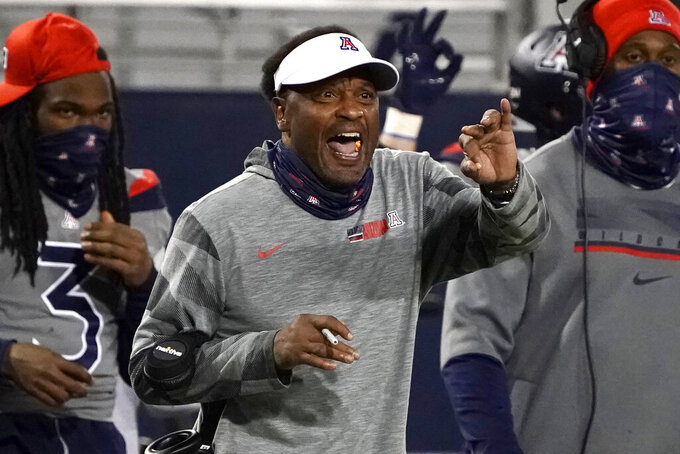 Arizona head coach Kevin Sumlin reacts to a call in the second half during an NCAA college football game against Colorado, Saturday, Dec. 5, 2020, in Tucson, Ariz. (AP Photo/Rick Scuteri)

Arizona State has lost two games in the final minute, three to COVID-19. Arizona had its opener canceled by the coronavirus and has lost all four games on the field, stretching its losing streak to a school-record 11 games.

It's been a strange year already, so no reason to expect Friday's Territorial Cup rivalry game to be any different.

The Sun Devils have won the last three games in the series — that last two under Edwards — giving them a chance for four straight for the first time since 1975-78.

This year's game will be the usual season finale, but under unusual circumstances.

Arizona State (0-2) opened the season with a disheartening loss, giving up two touchdowns in the final three minutes to lose 28-27 to Southern California.

Then the Sun Devils waited.

Multiple players and coaches, including Edwards, tested positive for COVID-19, wiping out their Nov. 14 game against California. The next two games, against Colorado and Utah, were shelved due to contact tracing issues.

Arizona State finally returned to the field last week and walked off with heartbreak again, giving up a late TD to lose 25-18 to UCLA.

“We were a little fatigued in the first quarter on both sides of the ball,” Edwards said. “You could see it in the players. Then it was just a matter of feeling the game speed again. We missed that.”

Arizona is searching for its first win since beating Colorado on Oct. 5, 2019. The Wildcats closed out the 2019 season with seven straight losses and, after the opener against Utah was canceled, have lost four straight to open this year.

“We’re both coming into this thing looking for a win,” Arizona coach Kevin Sumlin said. "I think that actually raises things up a little bit even more. We’ll see what happens after this game, with what’s gonna go on with whatever the Pac-12 decides with games down the road, but obviously this one is impactful for a number of reasons. The intensity level does get raised another bar.”

Arizona QB Grant Gunnell missed last week's game after injuring his shoulder on the first play against UCLA on Nov. 28. The Wildcats hope to have the sophomore back against Arizona State, but a decision may not be made until game day.

“He didn’t do anything last week, so we’re going to defer to our medical team and see where he is later on in the week,” Sumlin said.

Freshman Will Plummer took over when Gunnell went down and has thrown for 305 yards on 36-of-67 passing with 78 yards rushing. He also has thrown three interceptions.

Arizona State defensive end Tyler Johnson had a decent start to the season, finishing with five tackles, including two for losses against USC. The junior was a disruptive force last week against UCLA, finishing with three sacks, 4.5 tackles for loss and six tackles overall to earn Pac-12 defensive lineman of the week honors.

“He is one of the bright spots on defense right now for us as far as rushing the quarterback, getting to the quarterback,” Edwards said. "He made a couple of plays in the UCLA game, one-on-one tackles with their quarterback. Very difficult to do.”

Arizona State has won seven of the past 10 meetings in the series. ... The Territorial Cup is the oldest rivalry trophy game recognized by the NCAA in a series that dates to 1899. .... The Sun Devils have not started a season 0-3 since 1976. ... Arizona has 17 plays of 20 or more yards this year, matching their total in all of 2019.