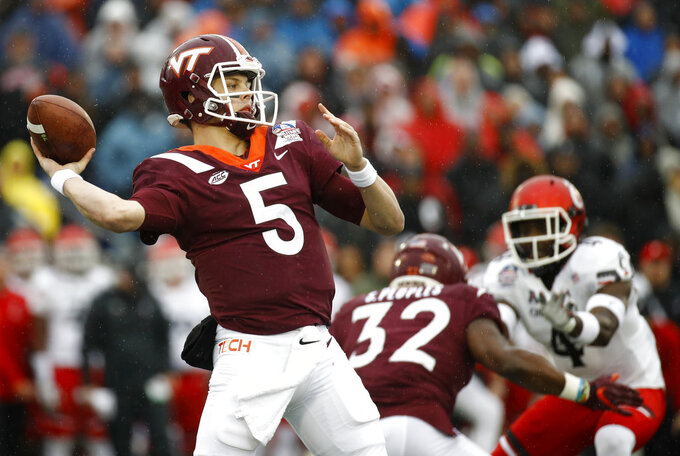 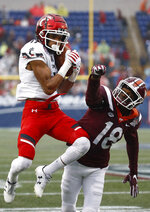 ANNAPOLIS, Md. (AP) — Racing back and forth on a drenched field, Cincinnati and Virginia Tech put up some lofty numbers as the rain came down in the Military Bowl.

Michael Warren found his footing when it mattered most, scoring the go-ahead touchdown with 1:29 left for the Bearcats, whose 35-31 victory Monday ended Virginia Tech's run of 25 consecutive winning seasons.

Warren ran for a career-high 166 yards, including an 8-yard burst up the middle to cap a frantic five-play, 64-yard drive in which he had 54 yards rushing.

That was enough to decide a tight game that featured 905 yards in offense and seven lead changes.

"The O-line did a great job of getting the push, especially at the end," said Warren, voted the game's MVP. "When you keep running the ball and wearing the other team down, they're not going to want to see any more of that."

The Bearcats' offense got a big assist from backup quarterback Hayden Moore, a senior who made 12 starts last year. After throwing only 26 passes in 2018, Moore entered in the first quarter and completed 11 of 25 throws for 120 yards in addition to running for a 19-yard score.

The victory gave Cincinnati (11-2) its third 11-win season in the 131-year history of the program following two straight 4-8 finishes.

Playing in a bowl game for the 26th successive year — the longest current run in the nation — Virginia Tech needed a victory to avoid its first losing season since 1992. Ryan Willis threw two touchdown passes and ran for another score, but it wasn't enough to put an upbeat finish on an unsatisfying season for the Hokies (6-7).

"It stings. It's disappointing," said Virginia Tech defensive coordinator Bud Foster, a member of the coaching staff since 1987. "I'm proud of the consistency and how we have played over the years. We've got a young group of men, and some of them need to realize what it takes to perform and play at this level."

A touchdown run by Moore put the Bearcats up 28-24 with 12:44 left, and two minutes later Willis ran it in from the 5 to give Virginia Tech its last lead. The Hokies had a chance to extend the margin with just under nine minutes left but failed on a fourth-and-1 at the Cincinnati 3.

"We had an opportunity to go up by two scores but we didn't," Foster said. "And then we didn't respond defensively. That's kind of how we've been this year, kind of up and down that way."

Ridder hurt his right leg after being tripped up out of the pocket during the Bearcats' second series. The American Athletic Conference rookie of the year went 4 for 7 for 86 yards and a touchdown before leaving.

Moore picked up the slack.

"I knew this opportunity was coming sometime in the year," Moore said. "I didn't blink an eye. I just went and grabbed my helmet."

After a back-and-forth first half that ended 14-all, Virginia Tech moved 69 yards to open the third quarter before Brian Johnson kicked a field goal for a 17-14 lead. After Warren put the Bearcats in front with a 40-yard touchdown run, Willis threw a 2-yard touchdown pass to Chris Cunningham to make it 24-21 heading into the fourth quarter.

The Bearcats fumbled three times and recovered all of them, including a touchdown by Kahlil Lewis on a ball Warren lost at the Virginia Tech 1.

"It wasn't the cleanest (win) obviously," Fickell said. "Look at the weather."

Cincinnati: The Bearcats are on the rise under Fickell, who can expect to accompany Cincinnati to more bowls in the years ahead.

Virginia Tech: The Hokies were way too inconsistent in a season that ended on a very disappointing note. Virginia Tech was 13th in the country in September and now must rebound from its first losing season in more than a quarter of a century.

Still, coach Justin Fuente had no complaints about his team's effort in this one.

"They laid it on the line today," Fuente said. "We had guys that wanted to finish this thing off the right way."

Cincinnati: The Bearcats have 81 underclassmen but must replace 13 seniors, including Lewis, a three-year starter.

Virginia Tech: The Hokies lose rushing leader Steven Peoples and second-team All-ACC DT Ricky Walker, who led the team with 10½ tackles for a loss during the regular season.