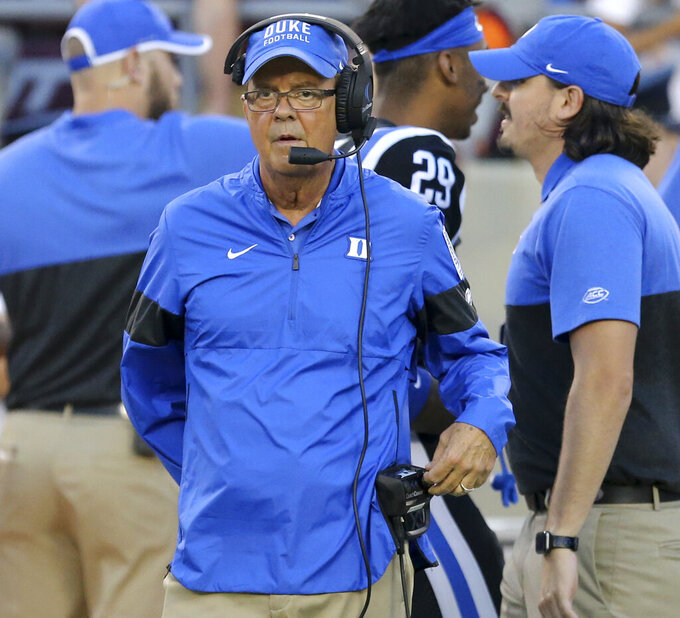 DURHAM, N.C. (AP) — No team in Duke's division has been harder on the Blue Devils than Pittsburgh.

Since the Panthers joined the Atlantic Coast Conference before the 2013 season, Duke is just 1-5 against them — its worst record against any Coastal Division opponent in that span.

But after beating one of its perennial nemeses a week ago, the Blue Devils will try to knock off another one Saturday night when Pitt visits.

"We just kind of have like a little revenge tour on every team that we lost to last year," Duke linebacker Koby Quansah said. "Every team's circled in our mind."

The Blue Devils (3-1, 1-0) had lost three straight to Virginia Tech before routing the Hokies 45-10. Now comes a challenge from yet another team that has dominated them lately.

Yet Pitt coach Pat Narduzzi bristled when he was reminded that he's never lost to Duke, saying "I don't know. I'm worried about 2019. It doesn't matter."

Duke coach David Cutcliffe says he doesn't need to remind his players about their struggles against the Panthers.

Some other things to know about the Pitt-Duke game:

The Blue Devils have yet to play a legitimately close game, with each one decided — either way — by at least 23 points. No Duke game has been closer than 11 points at any point in the second half. Meanwhile, the most one-sided Pitt game has been 16 points — the Week 1 loss to Virginia — and the last three have been decided by a total of 11 points.

Pitt will have QB Kenny Pickett back after he missed the closer-than-expected victory over Delaware last week, with Narduzzi saying he was held out for precautionary reasons. Pickett's average of 275.5 yards passing ranks second in the ACC.

The key to the game could be how effective the Blue Devils are at keeping Pitt away from QB Quentin Harris. The Panthers share the ACC lead and are tied for second nationally with 24 sacks. Duke has allowed only one sack — no team in the FBS has given up fewer — and that one was recorded by No. 1 Alabama in the opener.

PITT IN THE ACC

The Panthers have started ACC play 0-2 only once in their six previous seasons in the conference. The 2017 team dropped its first three league games en route to a 5-7 finish. That Pitt team was the only one since 2007 to miss the postseason.

Duke could lean on backup RB Mataeo Durant to form a one-two punch alongside starter Deon Jackson, with veteran Brittain Brown having season-ending shoulder surgery. Durant has carried at least nine times in each of the past three games while catching multiple passes in every game during that span.