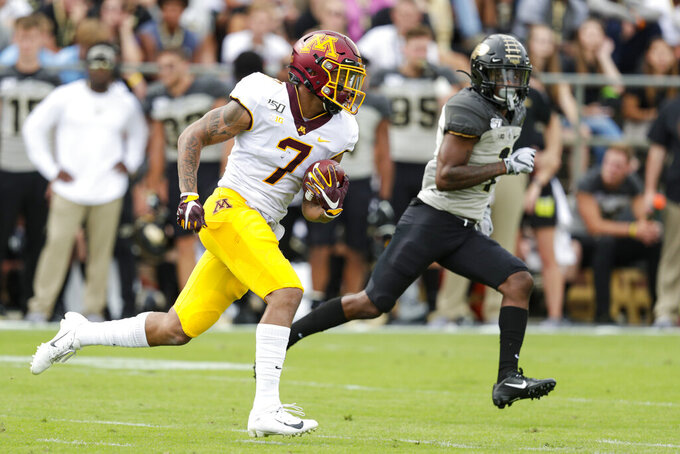 His receivers were spot on, too.

Morgan completed his first 14 throws, finished with 396 yards and four touchdowns, both career highs, and made enough plays over the final four minutes to preserve a 38-31 victory at Purdue

"Our quarterback had a 95.4 percent completion percentage. I'd say that's pretty good," Gophers coach P.J. Fleck said. "He's a winner. He's tough, he's a leader. He's not 6-foot-6 with a huge arm at 230 pounds, not flashy. But he's smart and he's mastered our offense."

That much was evident as Morgan wound up 21 of 22 and finished the first half just four yards short of his previous single-game high.

He became the fourth player in school history to complete 14 consecutive passes, tying a record last done by Mitch Leidner in December 2015. Morgan is now 8-2 as a starter and has Minnesota (4-0, 1-0 Big Ten) off to its best start since 2013

But Morgan had plenty of help.

Of the 56 plays run by the Golden Gophers, 12 went for 16 or more yards. Morgan connected with Rashod Bateman on scoring passes of 45 and 47 yards, Chris Autman-Bell on a 70-yarder and Tyler Johnson's 3-yard TD reception.

"I'm very disappointed in our pass defense and have been for a while," Purdue coach Jeff Brohm said. "We knew what they were going to do and that's the disappointing part. Just a very poor performance."

Even worse were the hits the Boilermakers' offense suffered.

Starting quarterback Elijah Sindelar and All-American receiver Rondale Moore left on the same first-quarter play when SIndelar was sacked hard on his left shoulder and Moore appeared to pull up with a left leg injury. After spending more than 10 minutes in the injury tent, Moore was carted to the Boilermakers' locker room.

Brohm said Sindelar would miss some time but did not update the status of Moore or provide details about either injury.

"It's been one of those years," Brohm said. "They (the backups) have got to step up and that's what they came here for — a chance to compete and play early."

Minnesota seemed like it had everything working in sync.

Rodney Smith opened the game with a 2-yard touchdown run and when the Gophers got the ball back, Autman-Bell's score made it 14-3.

Jack Plummer threw a 7-yard TD pass to Zander Horvath to get Purdue within 14-10 after Sindelar's departure, but Morgan hooked up with Bateman and Johnson for touchdowns to make it 28-10 at the half. He sealed the Gophers' sixth straight win with the second TD pass to Bateman for a 38-17 lead.

Purdue rallied with two fourth-quarter scores from King Doerue before Morgan ran out the clock.

"They can get themselves open all game, all I need to do is put it on them," Morgan said. "If you can hit them in stride and let them keep their speed they got a chance to break one tackle and go."

Minnesota: In addition to Morgan and his receivers, Minnesota was effective enough running to keep the Boilermakers' defense honest. It's a combination that could soon cause headaches for other Big Ten teams, too.

Purdue: The Boilermakers dug out of a 0-3 start to make a bowl game last season but it's going to be much more difficult if Sindelar and Moore miss significant time. Purdue also lost offensive lineman D.J. Washington with a lower left leg injury.

Minnesota: Bateman caught six passes for a career-best 177 yards. ... Autman-Bell had three catches for 97 yards and Rodney Smith ran 22 times for 115 yards. ... Minnesota has won six of seven in the series. ... The Gophers also have won four straight games outside Minneapolis for the first time since 2003.

PURDUE: Doerue carried 20 times for 94 yards and two TDs while catching four passes for 32 yards and another score. ... Plummer was 23 of 41 with 245 yards, two touchdowns and two interceptions. ... Freshman receiver David Bell had eight catches for 114 yards.

Minnesota running back Shannon Brooks ran five times for 5 yards in his season debut — only his second appearance since tearing the anterior cruciate ligament in his left knee during winter conditioning between the 2017 and 2018 seasons. He rushed for 154 yards last October in a victory over Indiana but tore the ACL in his right knee during the game.

Minnesota: Returns to Minneapolis next Saturday to face Illinois.