James Madison atop the Top 25 despite COVID-related layoffs 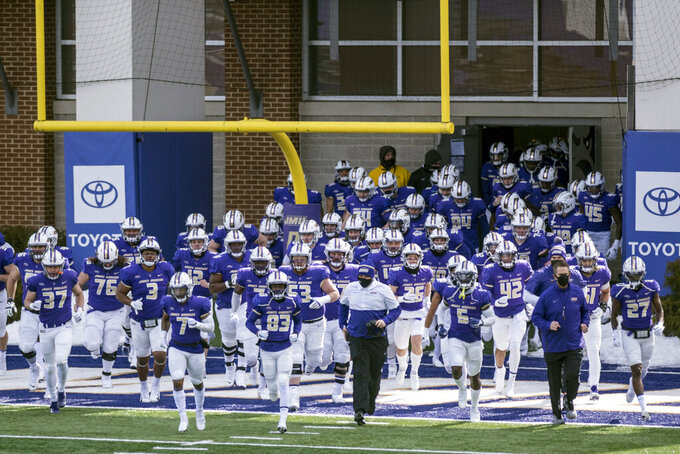 FILE - The James Madison team runs out onto the field before an NCAA college football game against Morehead State in Harrisonburg, Va., in this Saturday, Feb. 20, 2021, file photo. James Madison remains solidly atop the STATS Perform FCS Top 25, but the Dukes could go into the playoffs on April 24 having played once in six weeks. (Daniel Lin/Daily News-Record via AP, File)

The Dukes remain are No. 1 in STATS Perform FCS Top 25, but they could go into the playoffs on April 24 having played once in six weeks.

The Dukes (4-0, 2-0 Colonial Athletic Association) received 30 of the 40 first-place votes in this week's poll, but barring a late development, Saturday will mark their fourth pandemic-related weekend off in the last five weeks.

In their only game since March 6, they won 38-10 at William & Mary on March 27. James Madison's own coronavirus-related protocols prevented them from playing William & Mary and Richmond in the two weeks before traveling to Williamsburg to face the Tribe. Protocols in the Richmond and Elon programs forced the postponements of games last weekend and this Saturday.

“We’ve got some practice at managing ambiguity,” Dukes coach Curt Cignetti said Monday, noting that he and athletic director Jeff Bourne have been working to find an opponent willing to come play at James Madison.

Cignetti hopes the experience of playing at William & Mary after two postponements will help them if their next game is in the postseason.

“I'm really not looking that far ahead, to be honest. There's so many things happening on a daily basis,” he said. “I think we learned a lot going into the William & Mary game about getting a team ready with a three-week layoff.”

JMU does not have a game scheduled April 17, the day before the 16-team playoff field is announced, and it seems unlikely that a team in position for a possible at-large berth in the postseason would risk it by facing the Dukes.

Teams need only to have played four games to qualify for the postseason, but CAA rules require that a team have played at least three league games to win the conference's automatic berth, and the Dukes' situation won't change that.

“They have only played two, so they are not in position to get the automatic qualifier,” CAA Commissioner Joe D'Antonio said Wednesday.

The rules also state that if the league didn't play all its games, which it hasn't, a panel of athletic directors from the schools not in contention for the automatic bid will choose who will be the automatic qualifier, D'Antonio said.

The Dukes will still make the playoffs, and if their next game is a win-or-go-home playoff appearance, Cignetti trusts that his players will be ready.

“The kids are reading about being No. 1 and this and that, but I think they all understand that we have a lot of improvement to make,” he said.

It took Presbyterian and Stetson four tries to meet on a football field for the first time in 65 years, but after hurricanes wiped out games in 2018 and 2019 and the pandemic quashed a 2020 showdown, they finally got it done.

The game, seemingly fittingly, featured some oddities, including no offensive touchdowns from scrimmage as Presbyterian earned a 23-3 victory.

Jeffrey Smyth returned two interceptions for touchdowns and Oka Emmanwori brought a kickoff back 88 yards for another score for the Blue Hose TDs.

“I thought we needed to have a 30-for-30 episode on the rivalry that never was because we haven’t been able to play them,” Stetson coach Roger Hughes said. The Hatters fell to 0-9-2 in their 11 meetings with Presbyterian, which is playing a Pioneer Football League schedule and will join the league in the fall.

Stetson disbanded its program after the 1956 season and restarted in 2013.

Cole Kelley threw three touchdown passes and ran for two 1-yard scores in Southeastern Louisiana's 42-12 victory against Lamar. ... Justin Covington ran 44 yards for a touchdown on the fifth play of the game for Villanova, the first of his four TDs in the game as the Wildcats defeated Maine 44-17.