Jurkovec, BC roll over Georgia Tech 48-27 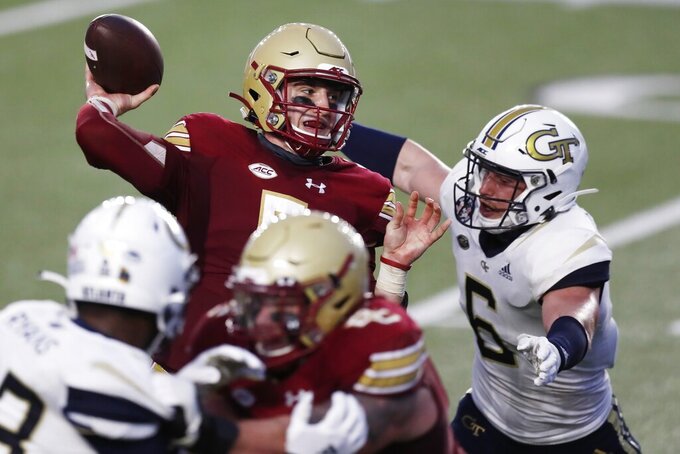 BOSTON (AP) — Boston College is back to being a running team, and that's fine with quarterback Phil Jurkovec.

After throwing for 300-plus yards in four of his first five games for BC — the most prolific start of an Eagles career ever — Jurkovec was happy to let the running game take over on Saturday in a 48-27 victory over Georgia Tech. The Eagles ran for 264 yards in all, with Jurkovec providing 94 of them to lead the way.

“I think we could have run the ball pretty much every play,” said the Notre Dame transfer, who threw for 145 yards and two touchdowns and also broke free for runs of 28 and 24 yards. “That’s a part of my game, being able to run. At least to keep the defense on their toes.”

Boston College has a tradition of producing beefy offensive linemen, who clear the way for 1,000-yard backs like AJ Dillon, Andre Williams and Montel Harris. But under Jurkovec and new coach Jeff Hafley, the Eagles (4-2, 3-2 Atlantic Coast Conference) were relying on a passing attack not seen in Chestnut Hill since Matt Ryan left in 2007.

Jurkovec's 1,526 yards in his first five games are the most by a BC quarterback in school history. And after leading the ACC in rushing with Dillon last year, the Eagles were last in the conference in 2020, never gaining more than 90 yards as a team in any game this season.

So it was a bit of a surprise when BC came out running against Georgia Tech — the first four plays, and seven of their first eight on the opening drive. Hafley said he awarded a game ball to David Bailey — not just for his 83 yards and two touchdowns, but for never complaining about a lack of carries in the previous weeks.

“I would have told you if I was worried about it, but I wasn’t," Hafley said. “If we’re able to run the ball, it’s hard to defend. I saw it coming and I was really proud of those guys.”

Fresh off a 73-7 loss to top-ranked Clemson, the Yellow Jackets fumbled twice in the first half -- including one that BC safety Mike Palmer returned 33 yards for a touchdown to make it 24-0. Jeff Sims responded with 32- and 33-yard TD passes, but the Georgia Tech defense wouldn't make its first stop until there were two minutes left in the third quarter.

“I think the story of the game — and we’ve got to correct this — is the turnovers,” Georgia Tech coach Geoff Collins said. “Three turnovers lost led to three scores; lost by three scores. ... Got to get the stop if we do turn it over. We did not.”

Bailey also ran for a 34-yard score, and CJ Lewis caught two TD passes for BC, which beat the Yellow Jackets for the first time since Ryan led the Eagles in a 2007 matchup of ranked teams. Georgia Tech (2-4, 2-3) had won the last three meetings and had never lost in Alumni Stadium.

Sims also sneaked in for a 1-yard touchdown to make it 41-21, but the 15-play drive ate up almost half of the third quarter. Georgia Tech followed with its first defensive stop of the game (other than BC's 0-play possession after receiving a punt to end the first half).

Then the Yellow Jackets allowed BC’s punt to roll to the 3 yard-line. On the next play, Jahmin Muse intercepted Sims at the 12 to set up Bailey’s 4-yard touchdown run.

James Graham took over at quarterback on Georgia Tech's next possession. Sims was 12 for 18 for 171 yards, two touchdowns and an interception; Graham completed six of 13 passes for 85 yards.

“Jeff was playing good. I think he had a really good passer rating going throughout,” Collins said. “Took some shots in the third quarter. We just felt it was best to make the change, but I thought he was playing well.”

Georgia Tech: Getting blown out by Clemson is to be expected, but a three-touchdown loss to Boston College is a sign of big trouble for the Yellow Jackets.

Boston College: The Eagles, who struggled to put away Texas State last month, had no problem this time against a weaker opponent.

Boston College: At No. 1 Clemson on Saturday. The Eagles lost to the eventual national champions 59-7 last year.