Kelly, Swinney express concern about no families at playoffs 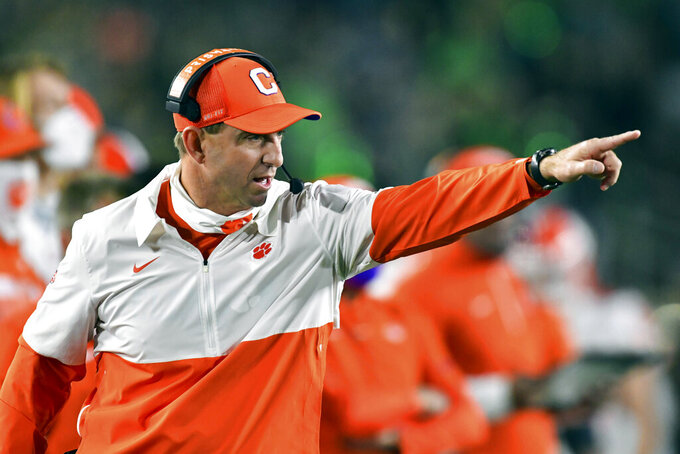 FILE - In this Saturday, Nov. 7, 2020, file photo, Clemson coach Dabo Swinney signals to his players during the second quarter against Notre Dame in an NCAA college football game in South Bend, Ind. The Notre Dame Fighting Irish beat the Clemson Tigers in a thrilling 47-40 shootout earlier this season. The big question now is if they can do it again. (Matt Cashore/Pool Photo via AP, File)

Kelly even went as far as to say “I’m not sure we'll play in the playoffs if the parents can’t be there.”

The Rose Bowl announced earlier this month that due to COVID-19-related restrictions put in place by the state of California no fans will be allowed at the game.

The coaches' comments came during a videoconference call Friday on the eve of the ACC Championship game in Charlotte, North Carolina between the second-ranked Fighting Irish and the No. 4 Tigers.

Swinney suggested the game should be moved to another location if families aren't allowed to attend.

“Whether we're in (the game) or whoever is in it, I don't care, it makes no sense to me to put a put a bunch of kids on a plane and fly them all the way to California to play in an empty stadium,” Swinney said. “That makes zero sense when you have plenty of stadiums where you can have fans, and most importantly, you can have families.”

Swinney pointed out that each family receives a $2,500 stipend to attend games and that the families of all four playoff teams should have the same opportunity to watch the game in person. The other CFP semifinal game will be played Jan. 1 at the Sugar Bowl in New Orleans, Louisiana.

The College Football Playoff national championship will be Jan. 11 in Miami Gardens, Florida.

“This is a year a year where everyone has had to make adjustments and (move to the game) to me would be a pretty simple one to make,” Swinney said.

Kelly said he’s only echoing the concerns of his players.

“I’m not the guy out there making this up because it’s not about my family," Kelly said. "It’s about their family, so I’m a voice for our team, and they’re concerned. They’re focused on the ACC championship. That’s where their focus is. They’re not going to be speaking about these things. But, if in fact we’re selected to be a part of it, this will then be No. 1 on their radar, so then I’ll have to address it with our leaders as to how they feel about this.”

Kelly said his players have been on campus since June and haven't seen their families much at all.

“They’ve had to fight through COVID, some of them have had COVID," Kelly said. "They can’t be around their families for Christmas, and you’re going to tell me we’re going to have a playoff and maybe one site can have families and the other can’t? Please.

“Somebody’s got to wake up in that room and figure this out or you might as well call this the professional league. I am so sick and tired of this playoff committee talking about having sites where you can’t have parents at and their families. It’s ridiculous.”

The CFP selection committee does not control where the game will be played. That’s up to the management committee, which is made up of the 10 FBS conference commissioners and Notre Dame’s athletic director.