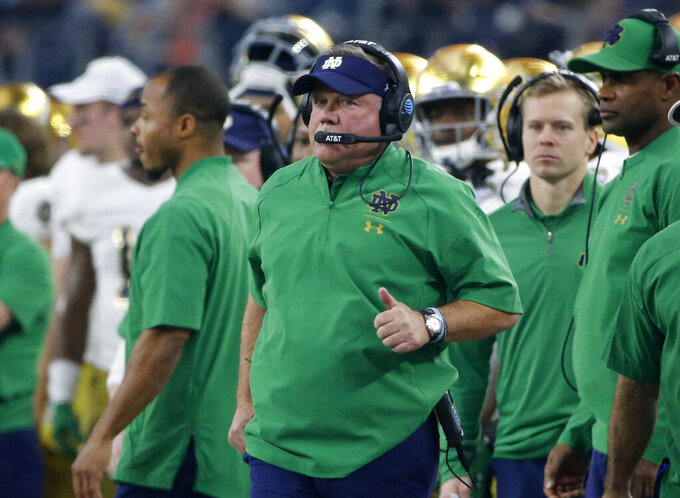 SOUTH BEND, Ind. (AP) — Nine sessions into spring practice, coach Brian Kelly has an idea how his depth chart is settling in at running back, wide receiver and cornerback.

Linebacker is another matter.

"Clark is working overtime," Kelly said of defensive coordinator Clark Lea, who oversees the position that graduated its top two inside linebackers in Te'von Coney (123 tackles) and Drue Tranquill (86). "There's a group of guys we need to continue to work on."

Earlier this spring, Lea indicated that he had numbers and talent, would do a lot of mixing and matching, and still might not know his starters after the Blue-Gold spring game on April 13 and possibly until the Fighting Irish open the season on Sept. 2 at Louisville.

"The conversation this spring has been to be comfortable being uncomfortable," Lea said. "Just like any human, they want to see a depth chart and I don't want to see one. I don't know why we need to determine this until we tee it up."

Kelly, however, did reveal one piece of the puzzle with six practices remaining: Asmar Bilal, a 6-foot-2, 227-pound senior who got 10 starts at rover and made 50 tackles, will replace either Coney in the middle or Tranquill on the weakside.

"We've seen enough that Asmar is in the rotation," Kelly said.

Junior Jordan Genmark Heath, who started for an injured Tranquill against Northwestern, and junior Jeremiah Owusu-Koramoah were seen running for a time with the first unit, but Lea has had sophomores Jack Lamb, Shayne Simon, Bo Bauer and safety Paul Moala, who is from neighboring Mishawaka, Indiana, and played for Penn High School, in the mix as well at linebacker and rover.

"If you were to ask our offensive linemen, they would tell you that Lamb was the toughest guy they had to deal with last year on the scout team when he was healthy," Kelly said. "(Moala) is a sure tackler and plays with good leverage. He's got the things you are looking for from a guy who controls the perimeter of your defense."

Junior Jafar Armstrong, who moved from wide receiver to running back last spring and stayed there through an injury-plagued sophomore season, appears to have claimed the No. 1 spot filled by graduate Dexter Williams, who had 995 yards and 12 touchdowns after sitting out the first four games while suspended. Senior Tony Smith Jr., sophomores Jahmir Smith and C'Bo Flemister and January enrollee Kyren Williams also are in the mix.

"He's physically healthy, knows the offense well and is comfortable in the role we've found for him," Kelly said of Armstrong, who averaged 5.3 yards per carry and 11.4 yards per reception despite missing three games because of knee surgery to clean up a turf infection.

"It's exciting to see that because we need depth," said Claypool, whose spring matchups with boundary corner Houston Griffith are helping both players and easing any pain Kelly and Lea feel with the loss of All-American Julian Love a season early to the NFL draft.

Notre Dame moved former quarterback-wideout-running back Avery Davis behind Griffith, the son of former Illinois and NFL fullback Howard Griffith. The younger Griffith, who played at safety, corner and nickel as a freshman, has solidified his No. 1 spot with the help of 6-foot-4 Claypool.

"It's an iron-sharpens-iron type of mentality," Claypool said.

There's been some good-natured trash talk between them, of course. Griffith, who wears No. 3, and his fellow corner Tony Pride Jr., who wears No. 5, have adopted a saying, "If you want to stay alive, stay away from 3 and 5."