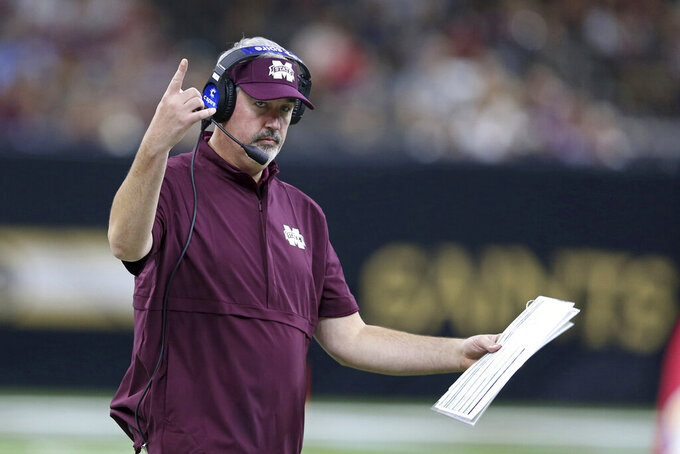 FILE - In this Aug. 31, 2019, file photo, Mississippi State head coach Joe Moorhead gestures during the second half of their NCAA college football game against the Louisiana-Lafayette, in New Orleans. Two people with knowledge of the situation say Mississippi State has fired coach Joe Moorhead after just two seasons. They spoke to The Associated Press on condition of anonymity because an announcement had not yet been made by the school. A meeting was scheduled Friday, Jan. 3, 2020, with Moorhead and athletic director John Cohen.(AP Photo/Chuck Cook, File)

The Bulldogs went 14-12 under Moorhead, who was previously the offensive coordinator at Penn State. He was hired after the 2017 season when Dan Mullen left Mississippi State for Florida.

This season, Mississippi State (6-7) made it to the postseason with a one-point victory against rival Mississippi in the regular-season finale. The Bulldogs then lost 38-28 to Louisville in the Music City Bowl.

“In this case, it goes a little bit beyond just wins and losses, although I want to state for sure that wins and losses matter," athletic director John Cohen said at a news conference. “There were some other issues at stake that we had to consider."

The firing comes four days after the Music City Bowl loss. Leading up to that game, there were reports of a post-practice fight between freshman quarterback Garrett Shrader and starting linebacker Willie Gay that left Shrader injured.

Moorhead didn't confirm a fight or details of Shrader's injury, but did say before the bowl game that the two players had spoken to each other and the issue was addressed internally. Shrader had been slated to start, but did not play against Louisville.

“Is it the (only) factor? No," Cohen said regarding how much of an impact the reports of a fight had on his decision. “But it is a factor, one of several factors."

Cohen said associate head coach Tony Hughes will serve as interim head coach while the school searches for a permanent successor. Cohen said he would hire a search firm “to get us some background information” but added that the search firm would “have no bearing on candidates or decisions to be made."

During the news conference, Cohen discussed the attributes he's seeking in selecting a coach.

“My family and I will always cherish our time in Starkville," Moorhead tweeted. “Part of us will always bleed Maroon and White. We wish the program nothing but the best moving forward."

The coaching change will be the 18th in the Football Bowl Subdivision this season, fourth in the Southeastern Conference — after none last season — and third in the SEC West. All the previous FBS openings were filled before the start of the early national signing period for high school recruits on Dec. 18.

Cohen said he had contacted all of Mississippi State's signees since firing Moorhead.

Moorhead is the third Power Five conference coach to be fired since November after only two seasons in the job, joining Florida State's Willie Taggart and Arkansas' Chad Morris. Moorhead was fired despite being just the second Mississippi State coach ever to reach bowl games in each of his first two seasons, matching a feat that Jackie Sherrill accomplished in 1991-92.

But he couldn't quickly build on the momentum established by Mullen, whose 69-46 record in nine seasons at Mississippi State included a 33-18 mark over his last four years.

Moorhead took over a team with high expectations in 2018, but the Bulldogs finished a disappointing 8-5 despite having a defense that featured three first-round draft picks and allowed the fewest yards per game of any Football Bowl Subdivision team.

He followed that up with a losing season this year, though he led Mississippi State to a 10th straight bowl appearance.

Mississippi State had 10 players withheld from eight games this season because of NCAA violations involving an academic tutor. That same NCAA investigation also resulted in Mississippi State vacating an unspecified number of wins from 2018.

“Sometimes at the end of your career, you think you’re going to write a book and talk about a season, talk about your career, and each season is a chapter,” Moorhead said after the Music City Bowl. “This season was a book in and of itself. Certainly 6-7 was not the outcome we desired.”

Moorhead, a Pittsburgh native who had mostly worked in the Northeast, seemed an odd geographical fit when hired by Cohen.

As he discussed his search for Moorhead's replacement, Cohen said he wouldn't make southern roots or an SEC background a prerequisite. But he also emphasized finding a coach who is the “best fit for Mississippi State University" and noted that it is a “unique place."

“We're a blue-collar, competitive, hard-nosed football team," Cohen said. “We play in the best division in the best conference in the entire country. We carry a chip on our shoulder and we have to outwork other people."

Moorhead arrived at Mississippi State with his star on the rise. He had a reputation for designing creative offenses and developing quality quarterbacks. In Moorhead's two seasons with Penn State, the Nittany Lions finished in the top two in the Big Ten in yards per play.

Before that he did a four-year stint as the coach of Fordham, his alma mater, and went 38-13 with three Football Championship Subdivision playoff appearances.

“I want to say clearly that Joe Moorhead is a terrific man and an outstanding coach," Cohen said. “I certainly wish the best of Coach Moorhead and his family in the future. He will have a bright future in coaching down the road."

The offensive success never came in Starkville for Moorhead, and the Bulldogs struggled for consistency at quarterback.

The Egg Bowl win against Ole Miss seemed to ensure another season for Moorhead, even though it was anything but an ordinary victory. Mississippi State nearly blew a late lead on Thanksgiving night, but Ole Miss receiver Elijah Moore was flagged for pretending to urinate in the end zone after scoring a potential tying touchdown in the final minute. Ole Miss kicker Luke Logan then missed a longer-than-usual extra point.

Now Mississippi State is looking for a new coach, too.