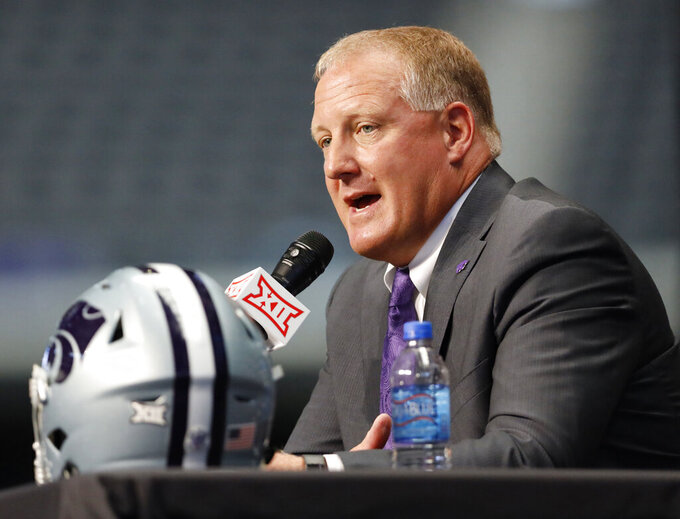 Klieman and Wells make their Big 12 debuts with home games Saturday. It will be the first game for both as head coach of a Power Five team, along with new West Virginia coach Neal Brown.

"I'm hoping you're making more of it than it is," Klieman said with a smile this offseason when asked about making the jump to a Power Five school while also following legendary Wildcats coach Bill Snyder.

There are 11 new coaches at Power Five programs this season, four of them in the Big 12.

Les Miles, the new coach at Kansas and previously in the league at Oklahoma State, wore his national title ring from LSU to Big 12 media days this summer. Klieman, who got four of his rings in the last five seasons as NDSU's head coach, left his championship bling on display back in his new office in Manhattan, Kansas.

"I thought that'd be a little bit heavy to have seven of them on," Klieman said.

Brown is coming off three consecutive 10-win seasons at Troy, but was an offensive coordinator for multiple seasons at both Texas Tech and Kentucky before that.

"That's four quality coaches. ... Guys that are proven, and guys that have shown they get the job done," said Lincoln Riley, coach of four-time defending Big 12 champion Oklahoma. "It's hard to envision each of those programs not making a big jump with these guys here."

Even with coaches making a big jump.

While Klieman and Wells both have been coaching for well more than two decades, each had only a single season on his resume as an assistant coach at a school currently in one of the five major conferences.

Wells, head coach at Utah State the past six seasons, was the quarterbacks coach at Louisville in 2009, when the Cardinals were still in the Big East before going to the ACC.

The Big 12 was still a league in its infancy when Klieman was a secondary coach on Mark Mangino's staff at Kansas in 1997, when the Jayhawks went 12-1 and won the Orange Bowl.

Kansas State athletic director Gene Taylor, who hired Klieman to replace Snyder, was the AD at North Dakota State from 2001-14. Not long before leaving NDSU for Iowa and later K-State, Taylor promoted Klieman from defensive coordinator to head coach for the Bison when Craig Bohl left for Wyoming after three consecutive FCS titles.

Wells took over at Texas Tech after Kliff Kingsbury was 35-40 in six seasons. Tech won its first seven games under Kingsbury in 2013, but went 28-40 after that, including a five-game losing streak to end last season.

Texas Tech AD Kirby Hocutt made a popular decision when he first hired Kingsbury, the former Red Raiders quarterback who had never been a head coach — and has since become head coach of the NFL's Arizona Cardinals. When Hocutt decided it was time to move on after three consecutive losing seasons, he got a coach whose career he had been following for years.

Brian Kelly is going into his 10th season at Notre Dame, which came after a three-season stint at Cincinnati in the Big East following three seasons at Central Michigan and a dozen at Division II Grand Valley State. Jim Tressel won four Division I-AA titles in 15 seasons at Youngstown State before his 10 seasons at Ohio State that included the 2002 national championship.

New Louisville coach Scott Satterfield is the only new Power Five head coach with less experience at that highest rung of college football than Klieman and Wells. Satterfield, the former Appalachian State quarterback, spent the past six seasons as head coach of his alma mater, and 12 of his 15 seasons as an assistant coach were also there.

"I learned every day at App. I think we're going to learn every day here," Satterfield said. "It is football. There's 11 guys that are going to be out there. To me, it's people. It's how you deal with people. You guys have seen guys that are successful in business, that they can (work with) people very well. Joe Gibbs comes to mind, he was a Super Bowl-winning coach in football and then he goes to NASCAR and he's won championships. He knows how to handle people. So I think there are a lot of similarities."