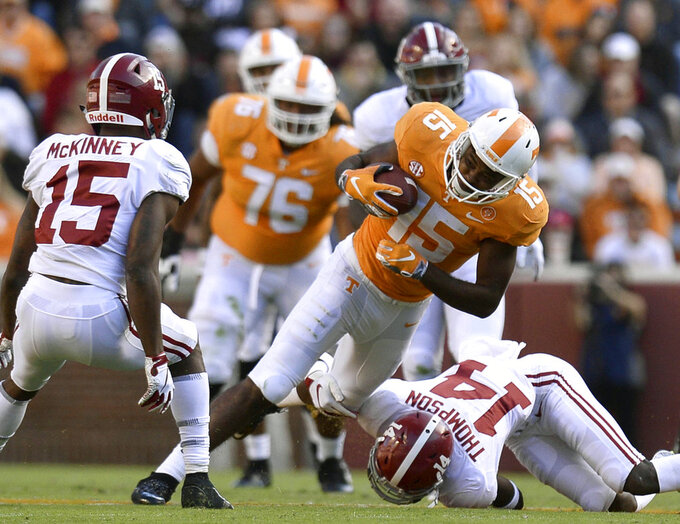 Tennessee wide receiver Jauan Jennings (15) catches a pass from Tennessee quarterback Jarrett Guarantano (2) during the first half of an NCAA college football game against Alabama, on Saturday, Oct. 20, 2018, in Knoxville, Tenn. (Joy Kimbrough /The Daily Times via AP) 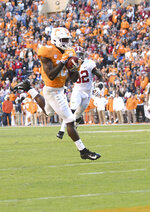 COLUMBIA, S.C. (AP) — South Carolina has struggled to start games quickly. Tennessee might be the right remedy for that.

The Gamecocks (3-3, 2-3 Southeastern Conference) and Volunteers (3-4, 1-3) face each other Saturday with each team finally hoping to get going quickly.

The Gamecocks have found themselves behind at halftime in their past three contests: 24-3 at No. 12 Kentucky, 23-14 against Missouri and 16-0 to No. 16 Texas A&M, losing two of those three games.

Tennessee has been outscored 69-3 against Power Five opponents this season, it too, looking for a faster start and a better result.

Gamecocks coach Will Muschamp doesn't have that excuse. His offense is led by experienced playmakers like quarterback Jake Bentley, tailback Rico Dowdle and receivers Bryan Edwards and Deebo Samuel.

Still, South Carolina finds itself usually playing from behind after halftime.

"I think on both sides of the ball we played well in spurts but not overall," Muschamp said. "That's something we need to continue to talk about in the organization and what we need to do to get out of the gates quicker."

Muschamp is hopeful a healthier Bentley will get the offense going quickly. He missed the Missouri game — a dramatic, 37-35 comeback win with a knee injury — and rallied the Gamecocks to a 16-all time against Texas A&M two weeks ago in the Aggies' 26-23 victory.

Muschamp said Bentley has moved better during the team's off week.

Some other things to watch when Tennessee plays South Carolina:

Tennessee quarterback Jarrett Guarantano was knocked out of a loss to Alabama in the second quarter after taking a big hit to the upper chest area from linebacker Mack Wilson. Pruitt has said Guarantano should be available for the South Carolina game.

Tennessee will be without one of its best players in offensive tackle Trey Smith, who is out indefinitely after doctors discovered blood clots in his lungs this week. The same problems kept Smith out of spring practice. Smith was a second-team all-SEC pick as a freshman last year.

South Carolina coach Will Muschamp said he sees more and more SEC coaches influenced by Alabama coach Nick Saban doing similar things on the field and in recruiting. Tennessee coach Jeremy Pruitt will be the third SEC coach formerly on Saban's staff that Muschamp — who also worked for Saban — will face after Georgia's Kirby Smart and Texas A&M's Jimbo Fisher.

Each of the last six games between these two teams has been decided by six points or fewer. South Carolina won last year's game 15-9 by forcing three straight incompletions to end the game after Tennessee had first-and-goal at the Gamecocks' 2-yard line.

He does acknowledge Alexis Jennings could maybe hope he does well while South Carolina wins. But "at the end of the day, I'm sure family comes first," he said.