Tennessee bounces back from dreadful start to season 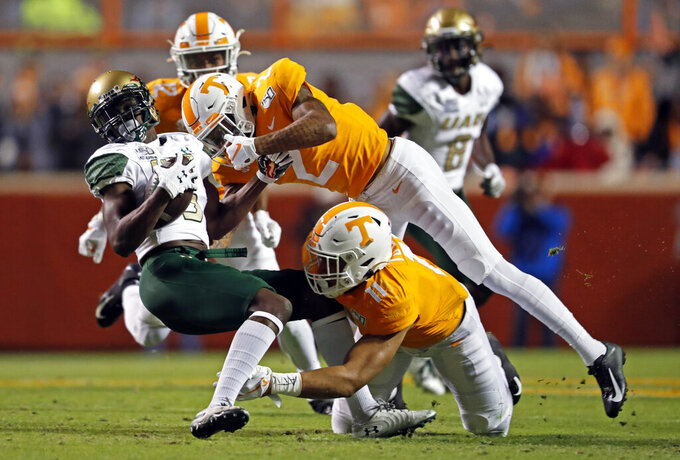 KNOXVILLE, Tenn. (AP) — Tennessee has been the subject of much ridicule after losing its season opener to 26-point underdog Georgia State and dropping four of its first five games.

But the Volunteers just might get the last laugh.

"Nobody expected the season to be like this, but we're still fighting," defensive lineman Aubrey Solomon said. "We're still churning away. I'm not disappointed because we're making a case for ourselves. It really matters what you do in November, and we're playing some pretty dang good football here."

The fact Tennessee is playing November games with postseason implications shows how far the Vols have come.

One month ago, Tennessee's situation looked so dire that athletic director Phillip Fulmer went on the school's call-in radio show to say that "I totally believe in" second-year coach Jeremy Pruitt. Fulmer, the coach of Tennessee's 1998 national championship team, even pointed out that "the coaching chapter of my life is long closed."

Tennessee lost to Georgia later that week but has looked like an entirely different team since.

"Our guys have never flinched," Pruitt said. "They just keep working. They believe in what we are doing here."

Tennessee has made this surge while shuffling quarterbacks.

Freshman Brian Maurer replaced Jarrett Guarantano as Tennessee's starter in early October but has missed the Vols' last two games while recovering from concussions. Guarantano, who has a broken bone in his non-throwing hand, has shared playing time with J.T. Shrout in those two games.

Pruitt isn't saying how he plans to use his quarterbacks Saturday at Kentucky.

Pruitt's quarterback choice might not matter much if Tennessee's defense keeps playing as well as it has lately.

Bryce Thompson tied a school single-game record by intercepting three passes in a 30-7 victory over UAB. One week earlier, Tennessee shut out South Carolina in the second half of a 41-21 triumph.

Tennessee has outscored opponents 54-7 over its last six quarters. Tennessee's 23 sacks match No. 12 Auburn for the Southeastern Conference's second-highest total, behind only No. 10 Florida.

That surge has come under new defensive coordinator Derrick Ansley, who worked for Kentucky coach Mark Stoops as the Wildcats' defensive backs coach from 2013-15.

"Derrick is a really great coach," Stoops said. "It doesn't surprise me that his unit is getting better and better as the year is going on."

Ansley's benefited from the return of key contributors.

Now that they're back, the defense has raised its game. Tennessee also has corrected the mistakes that led to its poor start.

"You have to figure out why we were 1-4," Pruitt said. "It was pretty simple. We turned the football over. We didn't get enough turnovers. We didn't play clean."

"There was no point in just sulking and being upset about a 1-4 start," safety Jaylen McCollough said. "We just had to put our nose down and go to work. The work is starting to pay off. We've still got a whole bunch of work to do, though."