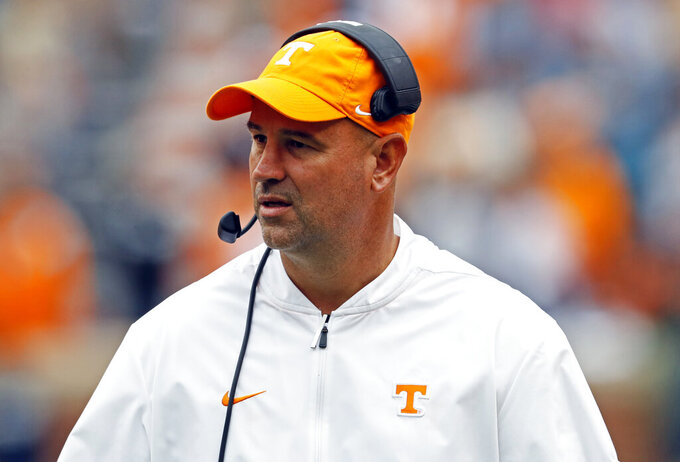 FILE - In this Oct. 12, 2019, file photo, Tennessee head coach Jeremy Pruitt watches during the second half of an NCAA college football game against Mississippi State, in Knoxville, Tenn. The third-year coach is embracing the virtual time he gets to work with his players following the go-ahead from the Southeastern Conference. He's also using social media to stay in touch with his current recruiting class and watching videos shot by his Vols of their personal workouts. (AP Photo/Wade Payne, File)

Tennessee coach Jeremy Pruitt finally has gotten the chance to talk football with his Volunteers, even if limited to a two-hour, video session online.

The third-year Tennessee coach is embracing the virtual time he gets to work with his players following the go-ahead from the Southeastern Conference. He’s also using social media to stay in touch with his current recruiting class and watching videos shot by his Vols of their personal workouts.

And Pruitt also is reverting to lessons learned during his high school coaching days where coaches are forced to do more with far less and still get teams ready to play to have Tennessee ready whenever college football can hit the field again.

“You get creative, you find a way,” Pruitt said Friday in a call with reporters. “Whatever the outcome is, whenever we do start back, it’s going to be the same for everybody. It’s something you have to think a little outside the box, figure out a way to be efficient with your time.”

That means tracking how players still rehabilitating injuries are recovering, some back home in towns and away from trainers. Pruitt says he and his staff talk daily about recruiting, how to install schemes and monitoring players taking online classes. Being ready for the unknown is part of that trying to build off an 8-5 season.

“We don’t know when it’s going to start back, but it’s something we have to be ready for whenever it does happen,” Pruitt said. “We’re working on it every single day.”

The SEC allowed teams in any sport to spend two hours once a week to meet online starting Monday. That allowed Pruitt and other SEC coaches to gather their players together, even if remotely and not on the practice field to at least talk football.

“We’re finding a way to implement some football on the days that we have those calls, and I think it’s good for the players,” Pruitt said. “It’s something that they want. It’s good for them to stay in contact with each other.”

Tennessee had been scheduled to hold the annual Orange and White spring game April 18. Pruitt said that’s when coaches work so hard to create the identity of their team.

“We don’t really have an opportunity to do that on the field,” Pruitt said. “But we have a chance to do that in other ways and that is something we are working hard to do.”

Pruitt does have to replace his strength coach with Craig Fitzgerald leaving for the same job with the New York Giants a couple weeks ago. Pruitt said the remaining members of the strength staff have been working with players who share videos of their workouts, but the Tennessee coach expects to hire Fitzgerald’s replacement soon.