Top 10 showdown as Georgia hosts Irish between the hedges 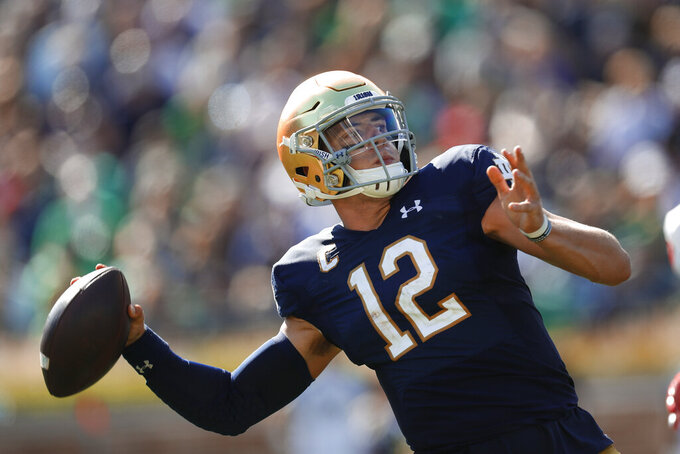 The Fighting Irish desperately need a victory over a Top 10 opponent to stake out a spot among the nation's elite programs. Until then, Notre Dame will be known as the team that flops badly in its biggest games, such as last season's College Football Playoff (a 30-3 semifinal drubbing by Clemson) and the 2013 BCS championship game (a 42-14 rout at the hands of Alabama). For Georgia, this is the lone chance to pick up an impressive nonconference win, which would boost its chances of landing a spot in the College Football Playoff.

Georgia OTs Andrew Thomas and Isaiah Wilson vs. Notre Dame DEs Julian Okwara and Khalid Kareem. The 320-pound Thomas is one of the nation's top tackles, a future first-round NFL draft pick and a member of the preseason AP All-America team. The Bulldogs are hoping the 340-pound Wilson returns after missing the last two games with an ankle injury. The best part of Notre Dame's defense is its edge rushers led by Okwara, a second-team preseason All-American.

Notre Dame: QB Ian Book. The Fighting Irish are counting on a big game from their senior signal-caller, who leads Power Five with an average of 19.07 yards per completion. Book will be facing a defense loaded with speed, strength and depth, but he might be able to exploit a cornerback group that is relatively inexperienced.

Georgia: Freshman WR George Pickens. The 6-foot-3, 190-pound freshman made spectacular catches each of the last two games and is already drawing comparisons to a former Bulldog great, A.J. Green. Also keep an eye on another freshman receiver, Dominick Blaylock, who has the makings of a future star as well.

This will be Notre Dame's first appearance at Dooley Field at Sanford Stadium. ... The teams previously met in the 1981 Sugar Bowl, when Georgia clinched its only consensus national championship, and two years ago in South Bend, where the Bulldogs emerged with a 20-19 triumph. ... Georgia PK Rodrigo Blankenship is perfect on five field goals and 19 extra points this season. For his career, Blankenship has connected on 173 consecutive PATs, ranking second in SEC history behind Auburn's Daniel Carlson (198). ... Notre Dame running backs have put together a streak of 1,041 carries without losing a fumble since Nov. 21, 2015.