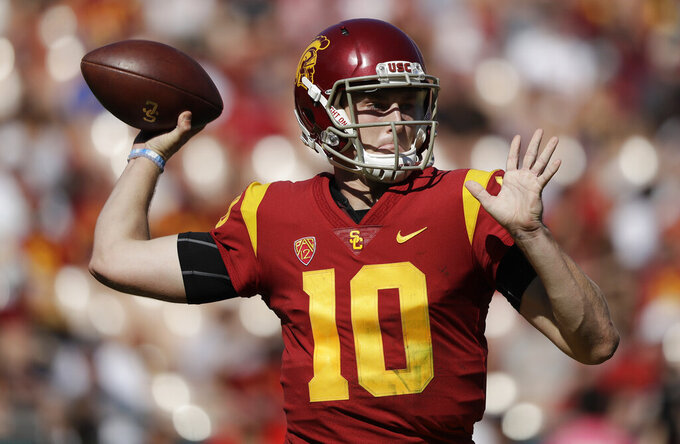 FILE - In this Oct. 27, 2018, file photo, Southern California quarterback Jack Sears throws against Arizona State during the first half of an NCAA college football game in Los Angeles. Sears has entered the transfer portal after failing to win the starting job in a four-man competition. Sears, a redshirt sophomore, announced his plans in a statement he posted to Twitter on Tuesday, Aug. 27. Sears' decision came less than one week after coach Clay Helton announced sophomore J.T. Daniels would start for the second straight season. (AP Photo/Marcio Jose Sanchez, File)

Sears, a redshirt sophomore, announced his plans in a statement he posted to Twitter on Tuesday. Sears' decision came less than one week after coach Clay Helton announced sophomore J.T. Daniels would start for the second straight season.

"Just heard about it. Obviously, all the quarterbacks, the whole team is bummed out," Daniels said after practice Tuesday night. "Jack was my roommate at the hotels the whole year last year. He really has been like an older brother. He's been a great supporter for me, a great friend. I'm going to really miss Jack."

The Trojans held an open contest among all four scholarship quarterbacks during spring practice and training camp as part of their transition to the Air Raid spread offense. Freshman Kedon Slovis was named the backup, with redshirt junior Matt Fink third on the depth chart and Sears fourth.

Sears seemed to be in contention with Daniels to start coming out of spring, only to fall behind Slovis and Fink over the course of camp. Helton said he and new offensive coordinator Graham Harrell recognized the emergence of Slovis, a three-star recruit from Scottsdale, Arizona, left Sears unlikely to see playing time barring a spate of injuries.

Sears plans to remain at USC for the fall semester to complete his undergraduate degree, which would allow him to be immediately eligible to play next season without having to sit out. He doesn't plan to be part of the football team this fall, but Sears wrote in his statement that he informed Helton he would be available if needed.

Helton said Sears had the option of remaining on the team this season while in the transfer portal. However, Sears thought it was best to focus on working toward graduating in December and figuring out where to play next.

Helton understood why Sears felt transferring is his best option.

"I don't hold it against him at all," Helton said. "Again, he's competed here. He's given his absolute best effort at all times. He's been a great teammate. And now he's going to be a graduate of this university, and that gives him the honor of going to play (as a graduate transfer) if he chooses to."

Sears made one start as a redshirt freshman, completing 20 of 28 passes for 235 yards and two touchdowns in a 38-35 loss against Arizona State after Daniels sustained a concussion the previous week at Utah.

A four-star recruit from San Clemente, California, where he succeeded New York Jets quarterback and former USC star Sam Darnold as the starter in high school, Sears was originally committed to Duke before signing with the Trojans and enrolling early.

Sears' departure leaves USC with three scholarship quarterbacks one season after Daniels, Fink and Sears all played at different points in the year for a 5-7 team. Helton does not believe the limited numbers at the position will be an issue, largely because of the Air Raid system installed by Harrell.

"I think that we can protect the quarterback extremely well, plus the ball gets out extremely quickly in this offense, so I'm confident in all three of the young men that are here," Helton said.